When it comes to treating the aging face, most everyone immediately thinks about a facelift. While a facelift can be a variable concept depending upon how it is done, many patients assume that it is an effective cure for all parts of the face including the mouth. The reality is that lifting the downturned corners of the mouth is almost completely unaffected by a facelift…and trying to do so will likely create a very tight and unnatural facelift result that will leave the patient disappointed.

The reason a facelift can not change the sagging mouth corners is two-fold. First, the point of pull is simply too far away to be effective. The distance between the ear and the corner of the mouth is too distantly separated. Secondly and equally important is that their vectors are completely perpendicular to each other. The sagging corner of the mouth drops vertically, while a facelift pulls tissues laterally. A negligible pull from the wrong vector equals no improvement.

The corner of the mouth lift represents a simple but highly effective method for changing the downturned or sad mouth corner. It works because it attacks the problem directly, affecting its position directly over the problem and in the right vertical or upward direction. Its simplicity is matched by its effectiveness whether done in isolation or as part of a more extensive facial rejuvenation procedure.

In the November 2013 issue of the Archives of Plastic Surgery, an article appeared entitled ‘Descended Mouth Corner: An Ignored But Needed Feature of Facial Rejuvenation’. In this article, the descended mouth corner lift, also known as an anguloplasty, is presented. The authors treated 71 patients using the corner of the mouth lift technique with consistently good results, with just one requiring revision. They conclude that this procedure by itself and in combination with other small operations or even a full face lift can help rejuvenate the aging mouth area. 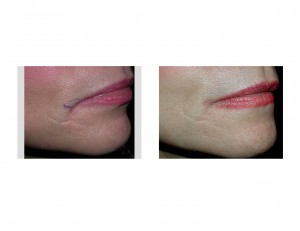 This is one of the few articles in the medical literature that has written about a mouth lifting procedure that has been around for decades. I would corroborate most everything the article has to say about the corner of the mouth lift with the exception of the number of revisions. Even though it is a very small procedure in surface area, it does create a scar line that goes slightly beyond the vermilion tissue of the mouth corner. While not usually an issue in older patients, some occasional scar touchups may be needed in younger patients with less tolerant skin.