The Dermal Anchor Technique in Otoplasty for Protruding Ear Correction 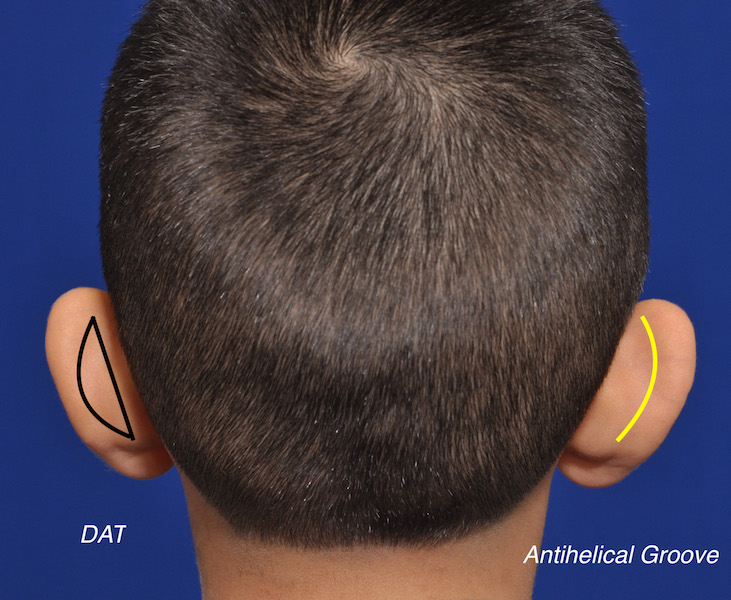 In the correction of the protruding ear numerous techniques have evolved over the years, all of which claim to produce good or improved ear shapes or less rates of relapse. Which each of these otoplasty techniques have a role in certain patients, good results are claimed with minimalist approaches to very aggressive cartilage reshaping techniques. This suggests that the limited tissue composition of the ear (skin and cartilage) can be successfully reshaped any number of ways when god surgical technique is applied. It also suggests that for many patients ‘less is more’ and it is not necessary to over think the operation. In the March 2020 issue of the Annals of Plastic Surgery an otoplasty article was published entitled ‘A New Cartilage-Sparing Procedure for Correction of the Prominent Ear Deformity – Dermal Anchor Technique’. The authors present what they describe as a new and simple technique called the dermal anchor technique. (DAT) As the name implies this is the suture adhesion between the de-epitheliazed skin surface on both sides of the antihelical groove on the back of the ear. This is appropriately called a ‘biologic anchor’. Over more than a decade in 76 ears (44 patients) in children to adults, the DAT technique was combined with either conchal excision or concha-mastoid sutures in 28 patients (63%) vs used alone in the remaining 16 patients. (37%) Before and after measurements were made at four points between the ear and the side of the head.

Their results showed uncomplicated healing without surface irregularities and suture extrusions. The recurrence/revision rate was very low. (2.5%) The before and after surgery measurements were significantly decreased.

The use of skin removal to set back protruding ears was the original procedures described by Ely over 100 years ago. It eventually led to cartilage manipulations which persist today due to the high rate of relapse. The DAT technique is probably more successful because the dermal adhesion surface area is much bigger than a fine suture one and the use of internal sutures today exist that didn’t exist back then. But in the study two-thirds of the otoplasty patients still had cartilage manipulations done…indicating that DAT alone is not sufficient for every type of protruding ear.