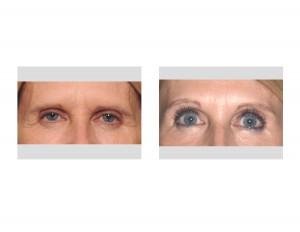 Browlift surgery is done by a variety of techniques. Most commonly it is performed from above lifting the brows using either an endoscopic, pretrichial, coronal or mid-forehead incisional approaches. Less commonly it is done from below with a transpalpebral technique pushing up the brows from below and securing with a reorbable Endotine device.

The remaining browlift technique is a direct one with the brow lifted through skin excision right above the brow at the superior hairline. Undoubtably it is the most effective because it attacks the brow position and shape directly, giving maximum control over brow shape and the amount it is lifted. While effective the direct browlift is the least commonly used technique due to visible scar line concerns.

In the March 2017 issue of the Aesthetic Surgery Journal, an article was published entitled ‘Transcutaneous Brow Shaping: A Straightforward and Precise Method to Lift and Shape the Eyebrows’. In this paper, the authors described their experiences with a direct brow reshaping technique either done alone or in conjunction with blepharoplasty and facelift surgery. A total of 212 patients underwent a direct brow lift procedure. All patients were evaluated clinically and by means of pre- and postoperative photographs. Patients completed questionnaires indicating scar quality and satisfaction with the results.

There were no major complications. Scar visibility was low, and patients expressed a high level of satisfaction with the aesthetic results of TBS.

The authors state that a misconception of the direct browlift procedure is that they create visible scars. With good incision placement, limited undermining, and presurgical use of Botox application, they have found that the direct browlift does not create visible scarring and is the easiest, most precise, and most reliable procedure for brow shaping. It is also the only technique that enables precise correction of minor brow asymmetries.