The Direct Necklift with a Wavy Scar Pattern

A full or lower facelift is the standard approach to treating significant loose neck skin and neck wattles that come with aging. Despite the well known effectiveness of lower facelift surgery, it does not have Appel to some patients due to the extent of the surgery and the resultant scars in and around the ears. This is most common amongst older men (greater than 65 years of age) who may not have good hair camouflage around the ears and may not be interested in what is perceived as an extensive operation.

An uncommon alternative to a lower facelift for these types of apprehensive patients is the direct neck lift. As the name implies, the neck wattle is directly excised and closed resulting in a fine line scar down the center of the neck. This type of necklift is very effective because it treats the problem by direct excision and does not rely on tissue repositioning/redistribution to create a more defined cervicomental angle. The concern, of course, is that the resultant scar will not heal well and its visibility will merely be trading off one aesthetic neck problem for another that would be perceived as no better or maybe even worse.

In the March 2016 issue of the Archives of Plastic Surgery, an article was published entitled ‘A Modified, Direct Neck Lift Technique: The Cervical Wave-Plasty’. In this paper the authors reviewed their experience in 37 patients over an eleven year period who had a direct neck lift with a curvilinear or wave-like scar. A skin pinching technique was used to mark the anterior neck before surgery, intraoperatively, redundant skin and fat was excised with midline platysma muscle plication and the skin flaps brought together and closed to form a wave-shaped scar.

The typical operative time was between 60 to 90 minutes with an average time of 70 minutes. The majority (80%) was satisfied with their result. The scars were graded as an on average 5.5/10 when viewed from the front and 7.3/10 when seen from the side 6 months after surgery. Complications consisted of one partial wound dehiscence (2%), one incidence of hypertrophic scarring (2%), and two cases of under-resection requiring a revision surgery (5%). The overall complication rate was 10%. 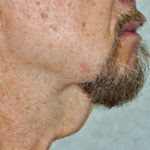 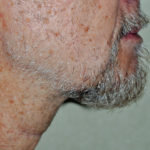 The direct necklift offers an effective approach with a rapid recovery and a low rate of any significant complications. (hematoma, infection and facial nerve injury) The operation’s issues come down to how well the scar heals and the patient’s acceptance of it. Patient selection is the key and in my experience this is almost always in the older male patient who has the best ability to heal a long neck scar favorably due to their beard skin. In this study half the patients were women with an average age of 60 years old. But regardless of gender this is a procedure that is most suitable for the older patient who has a clear understanding of the extent of the scar and can accept it as a good tradeoff for an improved neck contour.