The Effect of Upper Blepharoplasty on Eyebrow Position

One of the most facial aging surgeries is that of blepharoplasty or the removal of excessive eyelid skin. It is most common because everyone develops redundant skin of the eyelids with enough age and everyone has four eyelids. Even for those patients not driven by a desire for an aesthetic improvement, an upper blepharoplasty is more common than a lower blepharoplasty because it can cause functional symptoms. The weight and hanging of excessive upper eyelid skin can push down on the lash lines, making the upper eyelids heavy and causing upper visual field impairment. 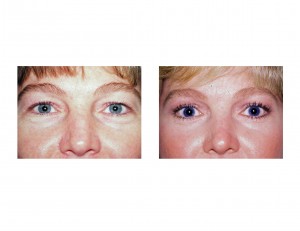 Because skin is taken away from the upper eyelid, and sometimes very aggressively to really get rid of it, the question is often asked if by doing so the eyebrow will be pulled down. Since it is common with heavy eyelids that one use their forehead muscle to lift the eyebrow and help take the weight off of the eyelids (so one can see better), does eliminating the skin reduce this habit which could also cause a drop in eyebrow position? (unmasking the real eyebrow level)

In the May 2014 issue of the Journal of Plastic, Reconstructive and Aesthetic Surgery, an article was published entitled ‘The Effect of Upper Eyelid Blepharoplasty on Eyebrow Position’. In this paper, a total of 140 consecutive patients who had upper blepharoplasty due to superior visual field obstruction were studied with before and after measurements of their eyebrow position. In addition, horizontal forehead lines were classified by degree. Their results showed that there was an average very slightdrop in eyebrow position by measurement. (less than 1.5%)  This was not visibly detectable with the exception in some men. In men, one of of six displayed a significant lowering of the eyebrow position. The sample size of men was small (14) compared to that of women. (126) Before surgery lifting of the eyebrows by means of frontalis muscle activity did not influence the position of the eyebrows after surgery, although forehead horizontal lines did seem to diminish significantly afterwards. 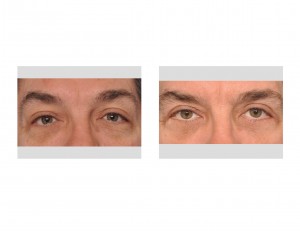 To some degree it us understandable why, in most cases, even an aggressive upper blepharoplasty does not pull the eyebrows down. Upper eyelid skin is very elastic and stretchy and allows for large resections of skin. It is not apparent at all during surgery that the position of the eyebrow moves down at all. However, it may have an eyebrow dropping effect in some men because men usually appear later for upper blepharoplasty surgery (they simply wait longer) and may have a strong and well established compensatory frontalis muscle compensation. Once their upper visual field is improved, the real natural position of their eyebrows becomes unmasked (lower) as the lifting effect of the frontalis muscle is no longer needed.