The Elbow Lift – An Extension of the Upper Arm Lift

« Common Myths About Breast Reduction
The Suture Suspension Facelift (Threadlift) – Does It Work? » 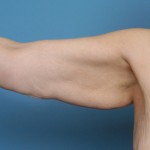 The elbow lift, or removing excess skin from around the elbow (middle) area of the arm, is an uncommon procedure in body contouring surgery. Most of the time an upper arm lift ( between the elbow and the armpit) is enough to take care of one’s arm concerns. But the extreme weight loss patient can present with loose skin that passes below the elbow area.

When it is obvious that a lot of excess skin sags beyond the elbow area with the arm horizontally extended, then an ‘extended’ upper arm lift can be done and the arm problem can be solved in a single operation. The length of the scar, however, can understandably make some patients hesitant to extend the scar that long in a noticeable area even if it is obvious that the shape of the arm can so benefit.  Other times, the amount of loose skin in that part of the arm is not so evident or the patient does not express concern until after an upper arm lift has been done.

The elbow lift removes skin around and beyond the elbow into the forearm area. The cut out of skin and the resultant scar can be done on the back of the arm or on the inside part of the arm. Like the medial (inside) upper arm lift, the scar continues across the elbow into the inside of the forearm. Because it is on the inside of the arm, it is less visible. Because it crosses the bendabale elbow area, however, it may develop a tight scar. A small z-plasty can be done at the crease of the elbow to prevent this potential problem although I have found this concern more theoretical than one I have actually seen.

The elbow lift can also be done on the back of the arm crossing the thickened pad area with the prominent underlying elbow bone. (humerus) The concern about crossing this area with potential wound problems is a very real one. The skin is thick in this area for a reason, it is the one spot where the traction and sheering from elbow motion is the greatest. And after surgery, patients must bend their arms putting a lot of stress on the wound edges, Wound separation is a not uncommon problem with wounds that cross this area. For this reason, I perform a bilobed or figure-of-eight skin cutout, removing the least width of skin around the elbow area in the longitudinal cut out pattern.

The uncommon elbow lift is a simple procedure that is less in magnitude than an upper arm lift. It can be done on either  the inside or back of the elbow area. Special care of how much skin is removed around the elbow is important to avoid wound separation when the back of the elbow approach is used.