Temporal augmentation has been a popular cosmetic procedure due to the use of synthetic injectable fillers and fat grafting. Such injection techniques make it easy to treat undesired temporal hollowing of varying degrees. By none of the injection materials are perfect and most will eventually dissolve and their benefits lost with the exception of fat. Fat grafting can be a permanent method of temporal augmentation but such an outcome is far from assured. 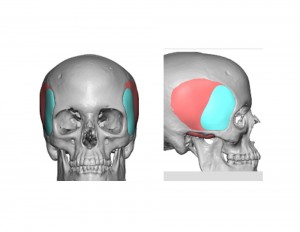 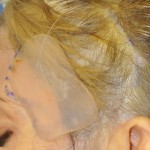 An extended temporal implant has been developed to address both Zone 1 and Zone 2 anterior temporal zone deficiencies. It has been designed to augment from the zygomatic arch all the way up to the side of the forehead. (temporal line) It is fairly thin (3.5mms) at its greatest thickness but does not need to be very thick when augmenting a long vertical area. 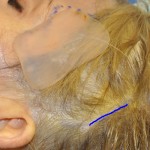 The extended temporal implant is placed through the same vertical temporal scalp incision as the standard temporal implant. It is also placed below the fascia on top of the temporalis musle. Its superior edges are very thin to prevent any visible ridging in the thin upper temporal tissues.

The extended temporal implant provides another facial augmentation option for more severe and extensive temporal hollowing defects. Its effectiveness and simplicity makes it an attractive alternative to injectable fillers and fat.