The Effects on Fat Cells of Vanquish Radiofrequency Treatments

« Plastic Surgery Case Study: Female Custom Chin Implant
What is the Maximum Amount of Fat That Can Be Safely Removed by Liposuction? » 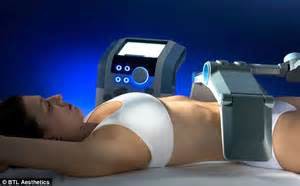 Selective radiofrequency (RF) is the energy basis for how the fat reduction device, Vanquish, works. Through the use of an external applicator, RF-based energy is delivered to the subcutaneous fat. This is purported to cause fat cell death and it does so without discomfort or recovery. But with so many other energy-based devices that do cause some discomfort with their use, does Vanquish really work as claimed?

In the June 2015 issue of the Journal of Drugs in Dermatology, an article appeared entitled ‘Human Adipocyte Apoptosis Immediately Following High Frequency Focused Field Radiofrequency’. In this paper two adult women underwent abdominal skin and fat biopsies before and just after after one 45 minute RF treatment. Temperature measurements were also done at 1 and 2 cms below the skin level. Fat cell death (histologic apoptotic index) had an average increase of almost 500%. Temperature measurements showed an average skin temperature of almost 32 degrees C. After treatment the average skin temperature was just over 39 degrees C.  At 1 cm depths the temperature rose from 40 degrees C to 45 degrees C in 15 minutes after treatment and remained so for the remaining 30 minutes.

This small but human study shows that an RF treatment causes an appreciable increase in fat cell apoptosis at one hour from the beginning of treatment. This occurred at a subcutaneous fat temperature of 45 degrees. The skin surface temperature remains substantially lower than that of the fat temperature.

The term ‘apoptosis’ sounds strange and unfamiliar but it is better interpreted as meaning a programmed cell death. This occur from a series of biochemical events that causes cell changes that ultimately lead to its death. Apoptosis should not be confused with the term, ‘necrosis’, which is cell death from an acute injury. That distinction is critical as apoptosis is a more gentle process rather necrosis which is a very traumatic one. As a simple analogy, it is the difference between getting a house to fall down by pushing on its walls versus dropping a bomb on it. In short the collateral damage between the two methods of cell death is quite different. This explains how selective RF treatments induce cell death by doing so without damaging nearby tissues in the process.