The Fate of the Belly Button in Tummy Tuck Surgery

But in the middle of this abdominal contouring surgery sits the belly button. (umbilicus) The belly button has no functional purpose other than to serve as a reminder that we were in fact born. But even though it has no bodily function, most people do not want to be without it. I have asked many tummy tuck and abdominal panniculectomy patients if they want to lose their belly button and universally no one does. Most reply that they would not look human without it. At the least it is a source of adornment for some women. 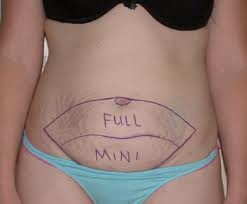 What happens to a belly button during an abdominoplasty depends on whether it is a full or mini- tummy tuck. In a full tummy tuck, the original stalk of the belly button is maintained (sometimes shortened as well) in its same position. The outer part is detached from the overlying abdominal skin which is going to be removed. The upper abdominal skin is brought down over the remaining umbilical stalk to close the large lower abdominal wound.  A new hole is then made in the new overlying skin and the original stalk brought back up through and sewn to the skin. Thus in a full tummy tuck a new hole for the belly button is made (hence the outer scar) but it is the original umbilical stalk and location.

In tummy tuck surgery, a new belly button is never made. Its attachment may be moved lower or a new hole made for it to emerge through repositioned abdominal skin. But you always keep your original belly button one way or the other.