The Goal and Effectiveness of Asian Blepharoplasty (Double Eyelid Surgery) 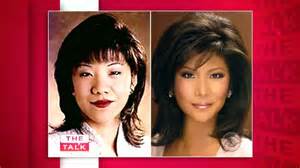 A plastic surgery story appeared on the internet and other news venues in regards to TV anchor Julie Chen having had eyelid surgery when she was younger. Other than the fact that she had it and she is highly visible, Asian eyelid surgery or Asian blepharoplasty is very common. It is estimated that ten of thousands of such eyelid procedures are performed each year around and is the most common cosmetic surgery in numerous Asian countries.

The Asian eyelid has some very significant differences from the Western eyelid due to the amount of fat in the upper eyelid and the frequent lack of a well defined eyelid crease. The upper eyelid crease is formed by the levator muscle, which lifts the eyelid, but in the Asian eyelid the fold may be missing due to the fat. This creates a flat appearance from the lashline to the brow and makes the eye looks heavy or partially closed. In addition, there is a fold of skin at the inner edge of the eyelid close to the nose known as an epicanthal fold which makes the eye look smaller and also pushes the eyelashes down.

The Asian double eyelid surgery is done to create the appearance of a fold on the upper eyelids if it does not exist or to adjust the height of the fold that is present in cases of eyelid asymmetry. Even though the procedure just creates an eyelid crease, its effects can be dramatic as it opens up the appearance of the eyes and makes them look bigger. 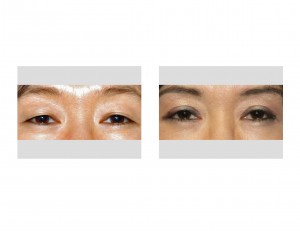 There are a wide variety of double eyelid surgery techniques, which have varying success at creating a permanent fold by attaching the skin to the deeper tissues. Despite the many nuances between these eyelid procedures they fundamentally break down into either suture techniques or open incisional methods. The suture technique (known as DST) does not use an incision and relies on sutures to cause the tissues to scar together to form a permanent crease. Its main disadvantage is that the result may be lost if the sutures break or they degrade over time. The incisional method is permanent and allows better customization of the lid crease but is more involved with a longer recovery. With either technique it requires precise marking before surgery and great attention to detail in executing it during surgery.

In admitting that she had the procedure, Julie Chen discussed the reason she had it done which is both revealing and consistent with the known motives amongst Asians for getting the double eyelid procedure. Because she was once told she would never be a TV anchor because she was Chinese. Her intention was to simply have bigger eyes so she didn’t look sleepy or angry in her interviews on camera…not to look less Chinese or Asian. This was not about trying to look more Western but to have a more alert eye look.