Facial asymmetry is common and can be caused by a wide variety of causes. But many facial asymmetries occur naturally, it is just the way the face developed. Given the complex embryological creation of a face it is a wonder that the two sides of the face ever get as closely matched in most people as they do. While there is always some discrete amount of asymmetry in all people’s faces, those in which it is more pronounced can find it troubling. 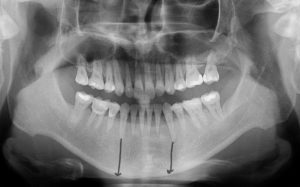 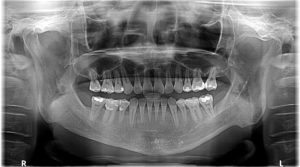 In excessive vertical elongation of the lower jaw, the inferior border hangs lower. It can occur at any area from the chin back to the jaw angles. When it involves the chin and goes back toward the angle but does not completely reach it, it can be treated by an inferior border shave from a submental incisional approach. A reciprocating saw is used to remove a premeasured amount of bone as determined from presurgical x-rays. The limits of the inferior border shave is the length of the saw blade that can be introduced through the small submental incision.

If the excessive vertical length involves the jaw angle, it can not be reached through a submental incision. An intraoral approach is needed changing from a reciprocating to an oscillating saw that can make a bone cut at a 90 degree angle.