Plastic surgery has many nip and tuck procedures from the face down to the thighs. All of these are about removing loose tissues from aging and stretching forces and pulling them tighter closer to their original position. When tissues are pulled upwards they are known as ‘lifts’. (e.g., facelift, breast lift, thigh lift) When tissues are pulled downwards they are known as ‘tucks’. (e.g., tummy tuck)

One of the less well known of the lifting procedures is the knee lift. This almost unheard of extremity lift achieved temporary celebrity status when actress Demi Moore purportedly had it done in 2006. At the time pictures showed her knees before and after although I would question, for reasons explained later, as to whether she had a true knee lift procedure.

Like all body areas, the knees do show the signs of aging. The constant flexion and extension of the knee eventually causes loose skin to appear in folds or rolls above the kneecap. These suprapatellar skin folds can also be exaggerated by the downward descent of the thigh skin which pushes down against the fixed skin on the kneecap. Like rings on a tree trunk, the knees inevitably show the telltale signs of one’s true age.

While there are numerous non-surgical devices that use various forms of energy for skin tightening, and they may be used on the knee area, they do not constitute a true knee lift. Non-surgical treatments can not tighten enough to effectively remove folds of skin. For those with significant knee skin folds , who hasn’t pulled up on their thigh to create a knee lifting effect.

Unfortunately the lifting effect for the knees can not come from any distant area like the groin creases…that is simply too far away to have any effect. A true knee lift involves the direct excision of these folds of knee skin and creates a suprapatellar scar to do so. The creation of this scar in a visible area is the primary reason why it is infrequently performed and rarely heard of…even in plastic surgery circles.

The knee lift is a very successful procedure because it does remove the excess suprapatellar folds of skin. This is done through a crescent-shaped excisional pattern and it will leave a scar. But the key to having a more favorable scar is precise placement of the excision location and to not remove too much tissue. Since the width and appearance of scars is highly influenced by the tension they are under. too much skin removal across a joint that repeatedly flexes is a setup for eventually creating a wide scar. 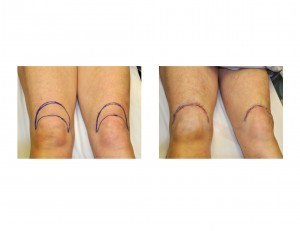 The markings for a knee lift are initially done with the patient standing. The lower skin crease that hangs down onto the knee cap is marked first in a curved shape. All the folds of excess skin are then pinched and the upper limit is then marked and a superior curved line created. The patient is then sat down and with the knees bent at 90 degrees the size of the crescent evaluated which will appear strikingly large. By using a pinch technique the upper limit of the superior excision line is re-evaluated and redrawn more inferiorly, reflecting the amount of skin that can be removed without undue tightness on the projected closure. It will usually be at least 1 to 1.5cm less than what was marked standing up.

The knee lift is done under local or IV sedation anesthesia. The intervening skin and subcutaneous tissue is removed between the marks but not all the way down to the fascia to prevent unsightly skin adhesions and scar tightness. A three layer wound closure is needed with a barbed suture for a subcuticular skin closure. Long-term suture support is needed to resist the stretching of knee flexion and to help keep the scar as narrow as possible. The knee incision are taped and ace wraps applied. Patients only need to avoid bending their knees greater than 90 degrees for a month after surgery.

While the knee lift is a simple outpatient procedure to perform and has a fairly easy recovery, it is not for every woman that does not like her aging knees. One has to be bothered enough about their extra knee folds that they consider a fineline scar as a good aesthetic trade-off.