The Limited Facelift: A Jawline Tuck-Up 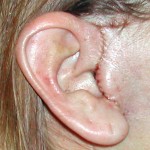 The sagging jawline is one of the first signs of sigificant facial aging. Occurring somewhere in the early to late 40s, the development of jowling begins which may be accompanied by looser skin in the neck and loss of the once-sharp neck angle. In seeing a lot of these early aging patients, they often are initially interested in non-surgical procedures such as threadlifts or device skin tightening. Their belief is that these non-invasive procedures will produce a good result but will not involve any ‘downtime’…..and are relatively inexpensive. At the very least, they definitely want to avoid something radical such as a ‘facelift’.

While most of these early facial aging patients don’t need a full facelift, they are completely unaware of the more limited facelifts options and that significant downtime is not needed. I find most patients don’t even have a good concept of what a facelift is and are under the misconception that it is a ‘full face’ procedure going from the top of the head down to the bottom of the neck with a month for recovery. And, they certainly don’t want that ‘operated look’. These patients require a good education as to a facelift, aka neck-jowl lift, is….which makes transitioning the discussion into the limited facelift options more understandable and appealing.

From both a result and value perspective, limited facelifts are definitely superior to threadlifts or any form of external, non-surgical skin tightening. The limited facelift goes by a lot of different names such as a mini-facelift, S-lift, Quicklift, Swiftlift, EpiLift, etc. Despite the different names, the procedure is largely the same. It consists of neck liposuction in most cases combined with skin excision and tightening in front of the ear and some deeper tissue tightening. Given that the neck is not widely undermined, and often not undermined at all, the procedure is associated with less than one week of swelling and bruising. I find most of my patients truly look good in a week. Close inspection will reveal the incision into and out of the ear but it is not all that easy to see. The procedure does a beautiful job of lifting the jowl area, and when liposuction is done in the neck, some real neck changes can be seen as well. The limited facelift can be combined with many other less invasive procedures such as Botox, injectable fillers, and light laser skin resurfacing to enhance the overall effect. Much is made of being able to do this procedure under local anesthesia, but I prefer to do it under a general anesthesia. That enables the patient to be ideally comfortable and the procedure is done in a time-efficient manner.