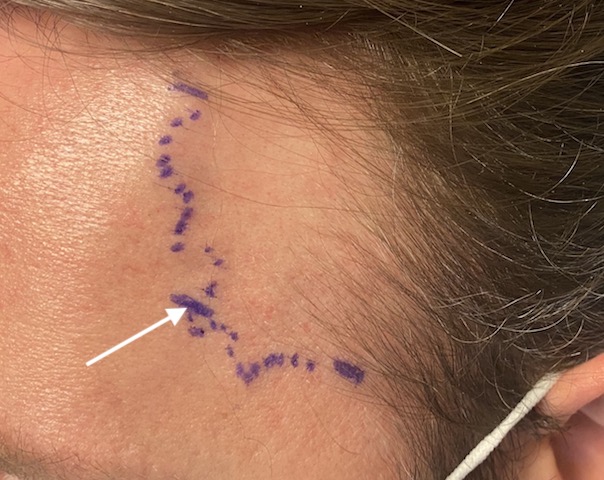 Prominent blood vessels in the temporal region of the forehead are a not uncommon aesthetic concern. Both visible arteries and veins exist in the forehead and are frequently confused. Veins have a more vertical orientation, are almost always straight, can appear blue in color in thin skin and have no palpable pulse. Conversely arteries have a distinctly different appearance most notably seen with a very serpiginous pattern across the temples up into the forehead. They also have a very easily detectable pulse in them due to the anterograde blood flow. 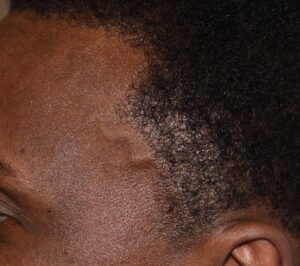 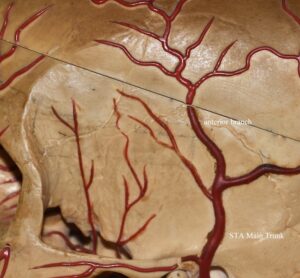 Aesthetically bothersome arteries in the temporal/forehead region comes from the well known anterior branch of the superficial temporal artery. Treatment of them is a temporal artery ligation procedure…but not the more historic procedure with the same name that was used for diagnosing temporal arteritis. This is a single area of ligation (actually an excision of a segment of the artery) which is not an effective treatment for eliminating the blood flow from the length of the visible superficial temporal artery. It may appear to work initially but back flow (retrograde) will either immediately or eventually make the artery visible again.

This is why a multilevel temporal artery ligation technique is used and is effective for elimination of its visibility. Every patient in my experience needs at least three ligation points, some may need up to four or five. The most proximal (at or in the temporal hairline) and distal (near the frontal hairline) ligation points are easy to understand and, in theory, should be completely effective at eliminating any semblance of a pulse…but it isn’t. 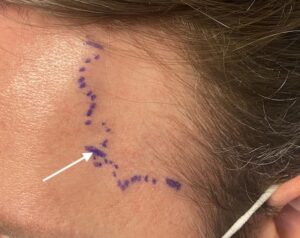 A central ligation point about midway along its course is essential which is always at the lateral mid-forehead level above the eyebrow. This is where the artery takes a turn and heads more vertical up into the scalp. It is at a branching point and without its ligation flow will continue to run through the artery. What is unique about this ligation point, besides being in the exposed forehead region, is that this is also in the neighborhood of the frontal branch of the facial nerve. Anatomic studies have shown that this nerve branch is in close association with the superficial temporal artery. Most anatomic diagrams show it below the artery in varying amounts. 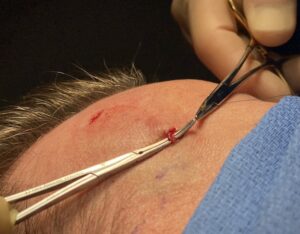 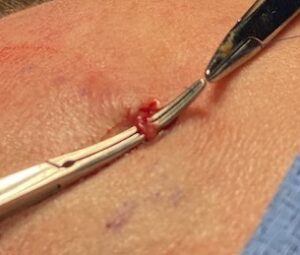 As it is being extracted and after it is ligated the patient is asked to raise their eyebrows, checking that the nerve is not in the artery being ligated. The skin is closed with small dissolvable sutures which goes on to heal with an inconspicuous scar.