The Physics of the Breast Implant Funnel Insertion Device

The biggest change in the silicone gel of breast implants over the last twenty years has been the improvement in form stability. By increasing the complexity of the silicone cross-linking the gel within the implant becomes more highly cohesive and stiffer than earlier generation breast implants. This helps to maintain its shape better and have less risk of gel migration should lack of shell integrity occur. It also aids in improved upper pole fullness with the higher profile implant styles.

Silicone Breast Implant funnel insertion device Dr Barry Eppley IndianapolisThe introduction of the funnel insertion device helps obviate these concerns by allowing a no touch method of implant placement. The funnel device works by changing the shape of the implant from a rounder form into a temporary more linear shape as it passes through the small end of the funnel which is inside the incision. It is the elasticity of the silicone gel and the enveloping shell which permits this temporary elastic deformation process to take place. Applying the physics principle of Hooke’s law the deformation of any body is proportional to the amount of deforming force provided that the body’s elastic limit is not exceeded. If not exceeded the body will return to its original shape once the deforming force is removed. 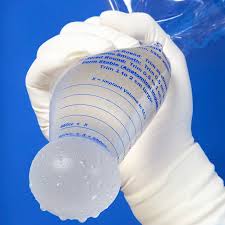 When it comes to being pushed through a small hole in a deformed shape the breast implant can do so as long as the resistance (rigidity) of the circular funnel hole is not greater than the fracture limits of the implant shell. This is influenced by the diameter of the end of the funnel and the size (volume) of the breast implant. This is why there are marks at the end of the funnel to enlarge it based on the size of the implant being inserted. I find these marks more generous than is needed as larger implants can be inserted through smaller funnel diameters than these numbers indicate.

Be9ond the physics of elastic deformation of the breast implant, there is another factor which ultimately determines its success. The ability of the silicone implant shell to slide along the silicone material of the funnel. Without a slick internal surface which is activated by water, the implant will not slide along the funnel’s surface no matter how much deforming force is applied. This gel decreases the surface resistance between the two materials which allows the elastic deformation to take place.

While the breast implant funnel device is now nearly a decade old, its application of some basic physics concepts continues to provide aesthetic benefits (smaller incisions) and longer longevity of silicone implants inserted through it.