The Principle of the Enhancing Custom Jawline Implant Design

The most powerful aesthetic bony procedure of the lower face is the custom jawline implant. It exerts its effect by expanding the inferolateral cortex of the mandible in a circumferential manner. This creates an improved separation between the face and the neck whose magnitude of change is a function of the thickness of the overlying soft tissues and the dimensions of the implant.

One of the misconceptions of a custom jawline implant is that it always creates a big effect and is done for large types of augmentations. While this may be true for a small number of men seeking the procedure, far greater numbers of men and women undergo the surgery to create an enhancing effect rather than a substantial lower jaw size increase.

An enhancing custom jawline implant is one that provides some definition to the corners (chin and jaw angles) and then connects them in a smooth linear fashion. It is easy to see how this changes the geometric shape of the jawline although that does not mean it is necessarily substantially bigger. A better shape does not always mean a bigger jawline size. 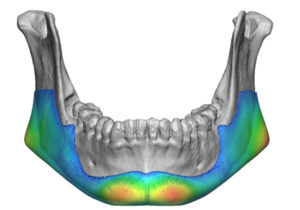 The majority of the implant volume is relegated to the three corners (70 to 80%) with the connections representing only a small portion despite their length. (20% to 30%) It is these thin connections that allow for implant flexibility which is key in surgical placement to be able to get it in through small external and intraoral incisions. 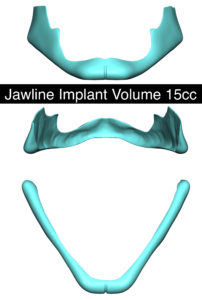 Surprisingly that implant volume spread along the jawline is in the 15 to 17cc range which is a lot of injectable filler syringes by comparison.

One of the concepts that can be the hardest to grasp in any custom facial implant design initially is that it is not truly about ‘spot’ augmentation which is how standard facial implants are used. Standard facial implants is mainly about a linear augmentation effect because it is relatively small in the surface area that it covers compared to the size of the entire bone. When implant volume covers most or all of the bone that it augments its total volume has a much more significant effect than any of its linear measurements would suggest. This can be the biggest error that the novice surgeon designer encounters often creating an implant that is too big or ill shaped to accomplish the patient’s goals.