The Relevance of the Vascular Pedicle in Buccal Lipectomies

The buccal lipectomy, or excision of Buchet’s fat pad, is a well known facial reshaping procedure. Its intent is to reduce cheek fullness by removing the main body of the fat pad through an intraoral approach. While there are debates about its long-term consequences in some patients, there is unformity amongst surgeons who do the procedure that it is a unique fat collection. 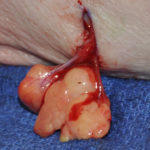 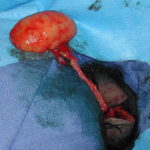 The uniqueness of the buccal fat pad is that it is encapsulated, has large fat globules and has a distinct vascular pedicle. In some ways it is very similar to a lipoma which also shares these same three features with two notable distinctions…it continues to grow over time and can occur in almost every conceivable location in the body where it is not supposed to be. (thus making it a true tumor) Every lipoma that I have ever removed as a well defined vascular pedicle as seen int the attached examples.

The encapsulated and vascularized nature of the buccal fat pad does not, however, gives us a clue as to what its functional role in the face is. It is commonly hypothesized that it sits between the masseter and temporalis muscles so they can move unimpeded without rubbing on each other. That explanation of its purpose may only come from its anatomic location. 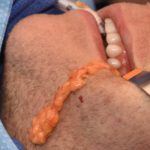 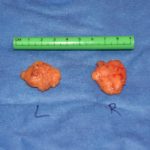 The vascular pedicle of the buccal fat provides the opportunity to do a partial or complete removal of it. Because it has a proximal vascular inflow, the distal half of the pad may be teased out and excised. This leaves the promimal fat pad which will survive and maintain its volume if desired. Thus while the extracted fat pad specimens look like ordinary fat, they are not.

When removing the entire fat pad, it is taken back to when the pedicle is seen which at that point it can be cauterized. The pedicle is then allowed to retract back into the capsule of the fat pad.

An interesting question often asked by patients is whether the buccal fat pad can grow back. While the typical answer is no, as it is  not known to do so, one wonders in a subtotal buccal lipectomy if it can.