Augmentation of the jaw angle (often referred to as jawline augmentation) is becoming an increasingly popular aesthetic facial procedure. The  recognition that the back part of the jaw as similar aesthetic significance as that of the front part of the jaw (chin) creates a more comprehensive diagnostic and treatment approach to lower facial aesthetic enhancement. While often perceived as being a completely male procedure, and it is definitely more common in men, it also has benefits for some women as well. 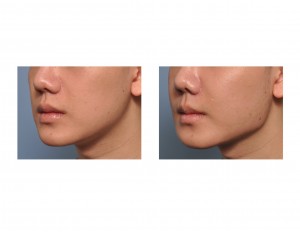 The use of jaw angle implants is unique in numerous ways. First, they are two separate implants (bilateral) whose symmetrical placement can be challenging due to surgical access and common asymmetries in jaw angle shapes that many patients have. Second the optimal augmentative effect must be considered as having a multidimensional jaw angle impact. (horizontal, vertical and anteroposterior) While many surgeons and patients think of jaw angle implants as having a ‘width only’ effect, this perception is both inadequate and historic. Vertical lengthening of the jaw angle for many patients is just as important or even more important that of a width increase.

But regardless of the jaw implant’s size and shape correct positioning on the bone is a critical element in getting a good aesthetic result. The key step in jaw implant positioning is elevation of the masseter muscle and its attachments off of the bone. This large quadrangular chewing muscle has two heads that run from the zygomatic arch to the inferior border of the mandible. The larger superficial head is what attaches to the jaw angle and anteriorly along its lower border. It is also along the inferior border where it joins as a tendinous attachment to the medial pterygoid muscle on the inner surface of the jaw. (pterygomasseteric sling) The smaller deeper head of the masseter muscle is largely covered by the superficial head and inserts much higher up along the lateral ramus near the coronoid process. 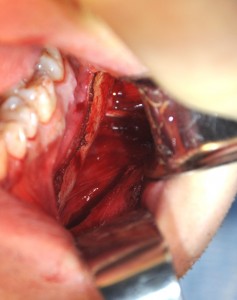 Elevation of the insertion of both the superficial and deep heads of the masseter muscle are critically important in making the subperiosteal pocket for jaw angle implants. Inadequate muscle release will have the implants sitting too high or too far forward…making them close to the incision in addition to having an undesired aesthetic result. The muscle must gently elevated off of the inferior border and there are numerous undescribed tendinous attachments that are important to release to adequately do so. This is of paramount importance when placing vertical lengthening jaw angle implants as 1/3 or even 1/2 of the implant may need to be sitting off of the bone (below the inferior border) to make a well defined jaw angle. In making this type of muscular release it is also important to not completely disrupt the pteryogmassteric sling or masseteric muscle retraction can occur with the creation of a high muscle bulge when biting down after surgery.