Many treatments have been touted over the years to create a facelift-like effect from topical creams to devices in lieu of having the actual surgical procedure. Today’s ‘alternative facelifts’ have taken on a very different approach and it is done through largely an injectable approach. These are all about adding volume to the face, plumping it out in select sunken facial areas. In many ways these are facial reinflation methods which work best for those patients who have lost volume and have a little loose or saggy skin.

These volumetric facelifts are comprised of two basic approaches. The first is the generic liquid facelift which completely uses synthetic injectable fillers and promises nothing more than a limited time period of benefit. The now more appealing, and the group that has caught the most press and is also heavily marketed, is the autologous injection techniques which promise more than just a short-term effect…they promise a rejuvenation of tissues as well.

These autologous injection techniques use either blood products such as platelet-rich plasma (PRP, e.g., the Vampire Facelift) or one ‘s own fat which is obtained by liposuction. Because our fat stores are now known to contain large amounts of stem cells, these type of liposuctioned-derived injections have become known as ‘stem cell facelifts‘. They have become heavily touted on the internet and many patient testimonials as to their rejuvenative benefits can be found online.

But what is a stem cell facelift actually? In reality, it is a bit of a misnomer. It starts with liposuction to harvest fat, usually from the abdomen, which is then processed during the procedure to get rid of most of its fluid contents. (blood, tumescent fluid, free fatty liquids) What happens next varies by the doctor doing it. Some will proceed to inject the fat concentrate while others may further process the fat to obtain a greater cellular concentrate of the material which presumably has more stem cells per injected volume. 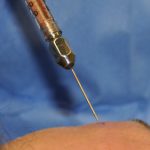 For those just taking concentrated fat and injecting it (aka fat injections), any stem cells that are in the fat are inadvertently carried along with it. How many stem cells and how active they are after being injected into the face is anyone’s guess. This is a stem cell facelift in the loosest use of the term.

To those who do a stem cell preparation step with the fat (usually a mechanical process that separates the stem cells from the fat and then they are injected along with the fat), this is a purer form of a stem cell facelift. Such higher concentrations of stem cells are purported to induce skin rejuvenation allegedly because of the growth factors that are produced by the stem cells. But no one really knows for sure.

While the appeal of the stem cell facelift is undeniable, does it really work? The regenerative properties of adult stem cells has been vigorously studied for decades in a  wide variety of medical conditions. But their use in aesthetic medicine is very new and, as a result, the medical evidence supporting their effectiveness is presently very weak. The marketing claims are high, but almost all the clinical evidence of its effectivenss is anectodal….and very short-term.

To really answer the question of the effectiveness of stem cell facelifts, split-face clinical studies would have to be done. Patients would have to submit to one-half of their face being injected with fat and the other half with fat that contained concentrated stem cells with postoperative assessment of appearance and skin improvement. Such studies are hard to conduct although patient recruitment would likely not be difficult.

Stem cells have a lot of regenerative potential but whether that applies to aesthetic conditions like facial aging remains to be seen. I like the concept very much but it remains a clinical procedure that is in the earliest stages of development. And as often happens in many developing aesthetic techniques, the marketing and promotion of it gets way ahead of the actual science to support it.