The Step-Off Deformity in a Sliding Genioplasty

The sliding genioplasty is a well known chin reshaping procedure. Unlike its cousin, the chin implant, it has a much greater versatility than simply increasing horizontal projection alone. It can be done to create a multidimensional effect from increasing or shortening vertical height, increasing or dereasing chin width and in some cases even moving the chin backwards for horizontal shortening.

The sliding genioplasty is a pedicled bone flap that maintains muscular attachments from the tongue and neck muscles which keeps the bone alive. While some perceive that it is a free bone graft,. it is not nor would it work if it was. Any bone gap created by the cut bone movement heals because the bone is alive and can make new bone to heal the gap without the need for bone grafting. 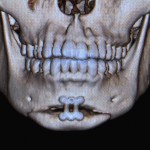 The basis premise of the sliding genioplasty is that it is created by a horizontal full-thickness bone cut through both cortices. The angle of the horizontal bone cut historically controlled how the bone could move since it was wired together and had to maintain some degree of bone contact. But with today’s titanium plate and screw fixation techniques, the angle of the bone cut is less important. 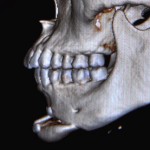 But no matter how the bone is cut, the back end of the bone cut goes through the inferior border of the mandible. This usually occurs somewhere behind the level of the mental foramen in the mid body of the mandible. Since the cut chin bone is usually moved forward to some degree, this creates a step-off or inferior edge deformity. The more the chin moves forward, the more than an inverted V step off deformity may be felt. Depending on the patient’s soft tissue thickness, such a step off may even been seen along the edge of the bone.

While step-offs in sliding genioplasties are common, the question is whether they should be managed at the time of the initial surgery. In most cases it is not necessary as the bone remodels over time and their prominence will become less or even completely become non-existent with enough healing time. There is also the issue that their management may potentially cause as many problems as it is intended to solve. Trying to fill the defect at the time of the initial genioplasty with some type of filler (e.g., hydroxyapatite granules) could result in a lump or clump of material that would be just as bothersome as a bone indent may be.