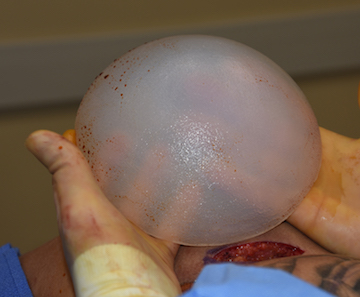 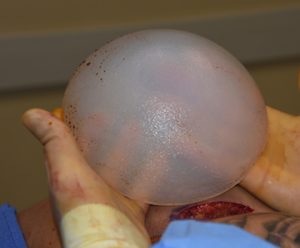 While buttock implants will never be used at the same frequency as that of fat injections (BBL surgery) for buttock augmentation, they do play a useful role in this form of body contouring surgery. Their role is when inadequate fat is available for BBL surgery and when fat injections have proven inadequate for the desired buttock size increase. While buttock implants are fairly straightforward, the pocket into which they can be placed is not. 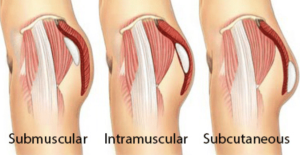 Buttock implants can be placed at four different tissue levels in the gluteal region; subcutaneous, subfascial, intramuscular and submuscular. While permitting the largest implants to be placed, the two pockets above the muscle  are associated with the highest rate of complications. The muscular pockets have much better implant camouflage and lower rates of serious complications. (such as infection, seromas and implant malpositions) While the exact percentage of surgeons who perform buttock implants that use either of the muscle pockets is not known, it is likely still that the majority do not as they are more challenging operations to perform.

The intramuscular buttock implant technique has gained traction over the past decade with the recognition of its lower complication rates. It is the most unique of all body implant pocket locations because it is developed at the location of a true natural plane. Rather it is an ‘artificial’ tissue place as the name implies, intramuscular, as opposed the prefix sub before muscular. As a result it is a difficult technique to learn and is also why, when not done deep enough, muscle atrophy above the implant occurs and some or all of the implant ends up in the subfascial plane/pocket.

In the March 2022 issue of the Plastic and Reconstructive Surgery journal an article on this topic was written ‘Buttocks Volume Augmentation with Submuscular Implants: 100 Case Series.’ In this paper the authors describe their experience using a submuscular technique for smooth round silicone gel buttock implant placement. A tumescent local anesthesia infiltration approach is used for both the incisional and submuscular pocket areas. Through asymmetrically placed bilateral paragluteal incisions (preserving the intergluteal fold) blunt dissection is used to reach the submuscular space where it is initially identified digitally and then instrument enlarged. The implants were inserted using a funnel device. The average implant volume placed was 325ccs. (225cc to 560ccs)

Complications of some form occurred in 30% of the patients. The most common complication was delayed incisional healing (11%) followed by implant flipping (7%), buttock asymmetry (4%), and hematoma. (2) No infections were reported. At up to 3 years followup no patient has requested removal or implant replacements.

Submuscular implant placement is done in a deep plane between the gluteus maximus and medius muscles. With a thick muscle layer maintained there is less risk of muscle atrophy which is well known to occur with the intramuscular  technique. Implant volumes are very similar to that used in intramuscular pockets. (I am surprised that a implant as large as 560ccs could be placed but this appears to be an outlier) 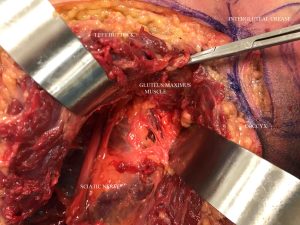 The question has never been with any implant in the body that the more soft tissue cover there is, particularly muscle, the less complications that will occur. That is equally true for buttock implants. But the question with the submuscular buttock implant pocket technique is the potential for injury to the sciatic nerve. The authors in this paper briefly allude to it and recommend high dose steroid if it occurs. But they did not say how often it has occurred in this case series, what type of symptoms occurred (pain vs leg weakness) and how long it takes to go way. This is actually the most important thing surgeons wants to know so they know what to expect in treating it as it will undoubtably occur.