The Theory and Science of Fat Grafting Survival 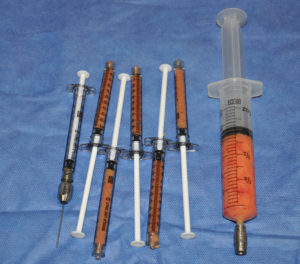 Fat grafting by injection is an ever expanding technique in plastic surgery. But it remains far from a perfect method because so little of the science of fat transplantation is well understood. What happens to the fat cells that are injected, do stem cells really survive and convert to fat cells after injection and what is the best method for ensuring survival of both fat and stem cells? These are the major clinical issues of interest. In lieu of not yet understanding the science, the most practiced technique is to overfill…knowing that some percentage of the transplanted fat will not survive and be resorbed.

While fat grafting has few complications, other than an occasional infection, the variability of take remains a vexing one. For some problems, injecting fat is done because it is simpler than other volumetric methods and because it is natural and not an implant. It is generally agreed, whether it is on the face or the body, that small volumes of injected fat survive better than larger volumes. This is believed to be so because the fat is closer to a blood supply to re-establish nourishment sooner but also because it is being asked to do less. Larger injected volumes presumably resorb more because many of the cells are more distant from a blood supply and have a longer period of oxygen deprivation.

A simple technique to one element of the hypoxia problem is to have the shortest time between harvest and injection with the shorter the better. Get the fat and stem cells back into normal body temperature near a blood supply as soon as possible. If fat can be harvested and injected in less than 30 minutes, it would be logical that there is a greater potential for more volume survival.

There are considerable biologic differences between the face and body recipient sites for fat grafting. The face is considerably more vascular and the injected volumes are comparatively smaller. But much of the face has considerable movement and this does not appear to have a favorable effect.

By and large, larger volumes of injected fat are limited to the breast and buttocks and are well known to have significant volume survival issues. But these two body sites are significantly different. Breast injections are done into breast tissue only while buttock injections are also placed into gluteal muscle as well as subcutaneous fat. This is why fat injection breast augmentation has been shown to work best with pre-expansion of the breast tissue prior to fat injections. Using an external vacuum that pulls on the breast tissue, it prepares the recipient bed tissues. This appears to have a stimulatory cellular effect through fibroblast growth and neovascularization. This is useful because fat does not work well to significantly ‘push’ tissues outward or expand them. It does not act like a synthetic implant. Compression on fat grafts induces resorption and cell death.

The buttocks, therefore, poses a conundrum. There is no known method of pre-expansion of the buttock tissues and patients usually have to immediately sit on them afterwards compressing the injectate. The saving grace may be that some of what is injected is placed intramuscular which has the best chance of rapid revascularization. But buttock augmentation by fat remains the one area where overfilling is not just advised but routinuely done.

Over the past ten years, a considerable amount of laboratory and clinical research has been done by plastic surgeons in many aspects of fat grafting. From techniques in harvesting, purification and injection to the assessment of potential recipient sites, some basic biologic behaviors have been revealed. Fat is not like food as leftovers is not appealing. Freshly harvested fat has been shown to survive much better than frozen fat. While it is tempting to save and refrigerate for later use with large volume extractions, it simply doesn’t do well. Fat grafting also appears to work better in younger than older patients. At what age fat survival is adversely affected is not clear but suffice it to say there would be an expected difference between a teenager and a 70 year-old. An overfilling technique should be more reserved for older patients.