The Tissue Level of Botox Injections in the Forehead 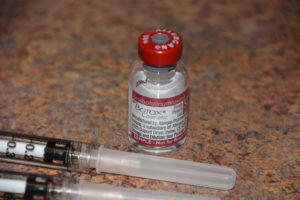 Botox is the most common method of forehead rejuvenation used today. Literally billions of injections has been done in various locations around the brows and upper forehead over the past two decades around the world. Its effectiveness is unquestioned  and there is no indication that the number of treatments provided in the foreseeable future will be any less.

While there are variables in the administration of Botox, including dose and forehead injection locations, injecting into the forehead tissues seems straightforward. But to those who have ever done Botox injections, the forehead tissues are thick and there are a number of different tissue planes where it can be deposited. From just under the skin to all the way down to the bone, the deposition of the neuromuscular toxin can be done. But what is the correct tissue level and does it matter?

In the March/April 2014 issue of JAMA Facial Plastic Surgery an article appeared entitled ‘Subcutaneous vs Intramuscular Botulinum Toxin – A Split-Face Randomized Study’. In this paper, a study was done to determine the difference between subcutaneous (SC) and intramuscular (IM) injection location. In nineteen patients, Botox injections were done on a randomized basis so that each patient received SC injections on one side of the forehead and IM injections on the other side. At two weeks and two and four weeks after injection, the degree of eyebrow elevation by measurements was assessed. These measurements showed no differences between the SC and IM injections. IM injections were rated as having greater discomfort than SC injections.

This study showed that the SC injection of Botox is equally effective in achieving denervation of the forehead muscles as IM injections. And what is known from my experience is that the deeper the injections are placed the more uncomfortable it can be for some patients. And with no benefit for effectiveness, there is no reason to place the needle any deeper than just under the skin.