« Chin Asymmetry – Options in Correction
Cellulite – What is It and What To Do With It? » 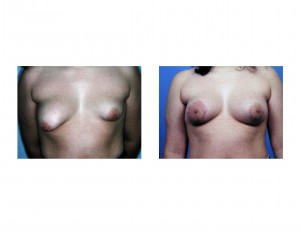 The condition known as “tuberous breast deformity” is a developmental disorder of breast shape and growth wherein the breast assumes a constricted shape.While it is not common, it is not rare either as it affects about 1 in every 200 women to some degree. Women who have developed in this way are usually very self-conscious about their condition and are very apprehensive about having their breasts seen by anyone.

Tubular breasts have a very narrow base and usually a long skin envelope. Sometimes people refer to tubular breast shape as similar to “snoopy’s nose” or a ‘rock in the sock’ look. By definition, tubular breast deformity is associated with herniation of breast tissue into the nipple areolar complex, constriction along the lower pole of the breast causing a poorly defined inframammary fold. Often the nipple areolar complexes are also lowered causing some degree of sagginess or ptosis. In some cases, the opposite breast is normal. But, more commonly, both breasts are affected and almost never the same. One breast will usually have much more skin and sag  than the other. Tuberous breasts come in all variations from a relatively minor areolar tissue herniation with small breasts to significant asymmetry and severely deformed breasts.

Tubular breasts are one of the most challenging problems in all of breast surgery that I see in my Indianapolis plastic surgery practice in which to get a good result. While improvement and better symmetry can be obtained, it usually takes more than one operation to do so. This is an important point for patients to understand. The abnormalities of the breast tissue and the asymmetry between the breasts pose surgical difficulties. Reconstruction of tuberous breasts are a combination of an augmentation, lift, and a reduction all rolled into one operation. Such a combination of dimensional changes, particularly in the face of asymmetry, do not usually allow for an ideal immediate result. Optimal results almost always come from secondary revisions.

The fundamental steps in tuberous breast surgery are implant augmentation (with inframammary fold lowering), areolar reduction with a lift, and release of the constricted breast base. Because an areolar reduction and breast tissue release is needed, a circumferential areolar incision is is needed. Through this approach a breast implant can be placed and the lower breast fold lowered and the lower pole of breast tissue released. This can also be done through a lower breast crease incision but this will result in two scars as opposed to one. Because the two breasts are usually different, two different size implants are needed. Either saline or silicone gel implants can be used. Saline implants are easier to get in through the areola, while silicone may be better off placed through a lower breast fold incision. Perfect symmetry between the implants is difficult as the amount of overlying skin is usually different between the two breasts.

The areolar reduction with a lift is also a key step. The periareolar reduction is done to keep scars off of the breast skin. But there is a limit as to how much lift can be obtained this way and these scars almost always widen, particularly if the donut of skin that is removed is significant.  It is the outward appearance of the areola and scars that ultimately almost always requires a revision to maximally lift the lower breast and to try and narrow the scars as much as possible.