The facial aging process is one that is well known as everyone will eventually see it on their face. The eyes get heavy, the brows descend, the cheek fall, jowls develop and the neck sags. Women become concerned earlier in the aging process and proceed to do procedures to treat or slow it down in an overall more comprehensive manner. Men take a much more delayed approach to it often waiting until one facial area becomes a major concern or until the facial aging process is fairly advanced. 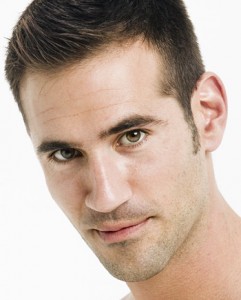 While the face ages largely similar in both men and women, the facial procedures used to treat them are often done differently. Not as many men have facelifts as their aging neck and jowls are more tolerated. But in men that have facelifts they must be done very carefully, respecting the natural hairlines of the temples and behind the ears and being careful not to displace the beard skin into the ear canal. Incisions must be placed very inconspicously and often less of a tightening result must be accepted to keep the scars hidden. That is not a bad thing as men look better underdone than having their faces pulled too tight anyway.

While men also develop heavy upper eyelid skin and lower eyelid bags just like women, their eyelid lifts (blepharoplasties) need to be done more conservatively. Browlift options in men are more limited due to the frequent lack of adequate scalp hair and a well defined frontal hairline. The most common male browlift method is through the upper eyelid (transpalpebral browlift) using the endotine device to accomplish the lift. This produces a very modest browlift but creates no visible scars and with more conservative eyelid skin and fat removals can avoid overfeminizing the male face and creating an unnatural overdone look.

Men do not engage in as many Botox and injectable fillers treatments as women as some wrinkles and signs of aging are more tolerated. A more natural result for men is one that reduces the worst of the wrinkles but does not eliminate all of them. This is the same reason men, at best, will only do a bare minimum of facial skin care. Many men would rather seek more definitive surgical procedures, or do nothing at all, that engage in non-surgical procedures that require frequent efforts to maintain.

Facial reshaping surgery is vastly different in men than women. Male rhinoplasties must keep a high and straight dorsal line and avoid an overly upturned tip while most women desire a smaller less projecting tip and lower dorsal lines. The shape of the face in men is dominated by a strong jaw and requests for chin, jaw angle and even total jawline enhancements are not uncommon to pursue a more masculine appearance and even the so called ‘male model’ look. Men favor higher more angular cheek augmentations while women prefer a lower more anterior rounded cheek prominence. Men pursue brow bone surgery for either reduction of an overlying prominent one or for augmentation to create a more masculine brow prominence and a more backward sloping forehead profile.

Plastic surgery for men has its own unique requirements both in the type of surgeries and the demeanor of the patients. One should not assume that every plastic surgeon or plastic surgery practice is equally adept about meeting the needs of the male patient. Just like breast reconstruction for women or body contouring after massive weight loss, the male patient presents unique challenges for a satisfying surgical outcome.