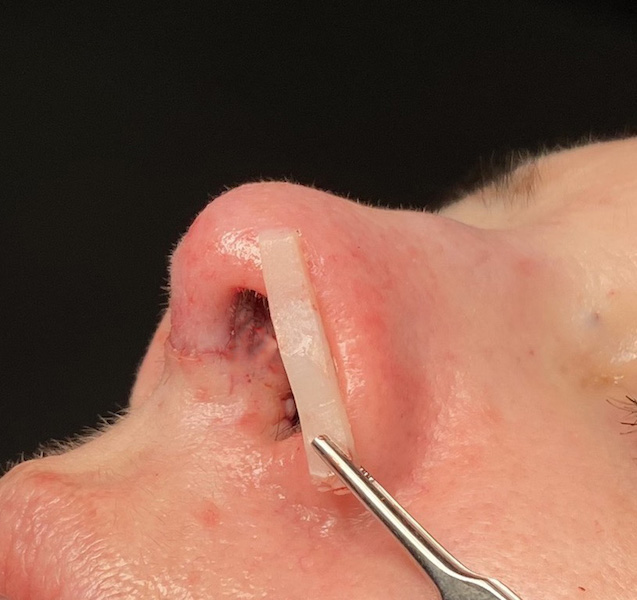 Rhinoplasty surgery is fundamentally about changing the osteocartilaginous structural support of the nose. The eventual aesthetic result becomes how the overlying skin shrinks down around the reshaped nasal structure. While this is an accurate assessment for much of the nose, it is not completely accurate for certain component parts of the nose. 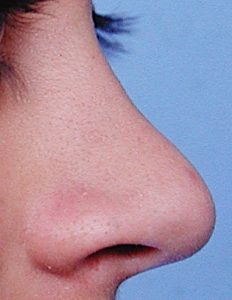 One such part of the nose that does not have direct hard tissue support is that of part of the nostrils, specifically the alar rim that runs from near the tip of the nose down towards the base of the nostrils. The alar rim is an important aesthetic component of the tip of the nose as it makes up the superior nostril border. From the side view it ideally has a smooth oval contour with a very slight arch about halfway along its length. Ideally it should only lie about 1 to 2mms above the long axis of the nostril. Whether it is due to congenital hypoplasia or weakening/scar tissue from prior rhinoplasty surgery, a highly arched alar rim is an undesired aesthetic feature. It makes the person feel that others can see right into their nose (too much nostril show) or creates an obvious tip asymmetry when it exists just one side 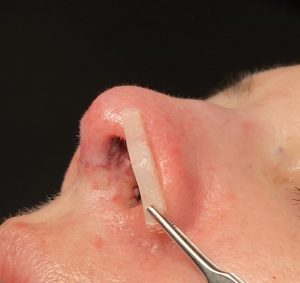 In the October 2021 issue of the journal Plastic and Reconstructive Surgery an article was published on this topic entitled ‘Expanded Role of Alar Contour Grafts’. In this paper the authors review the four basic types of alar contour grafts for use in primary and secondary rhinoplasty. This is based on the anatomic premise that the alar rim position is highly dependent on cartilaginous support even though the lower alar cartilage does not directly parallel the alar rim completely along its superior border. Alar contour grafts are best done with septal cartilage as it is both straight and stiff. The traditional alar contour graft (type 1) is placed through a stab incision inside the base of the nostril and is used for smaller upper third rim deficiencies or as support for the potential for alar rim retraction during primary rhinoplasty. The extended alar contour graft (type 2) is for larger rim deficiencies and has a longer length that extends down into the alar lobule. Its longer length allows it to act like a tent-pole giving it a stronger effect. The fixed extended alar contour graft (type 3) is a long cartilage graft whose anterior end is fixed to the underside of the dome with a suture. It provides good support to the weak soft tissue triangle area. Dual retrograde alar contour grafts (type 4) are smaller grafts placed more inferiorly to the traditional alar rm graft for residual minor alar rim deficiencies. 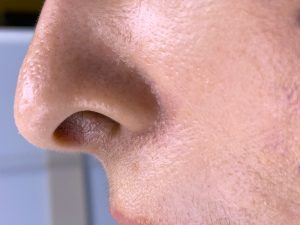 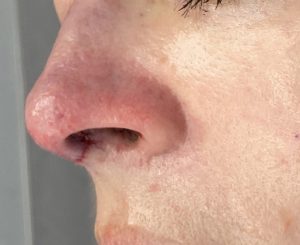 The alar contour graft is a valuable and often underused technique in rhinoplasty. In primary rhinoplasty it has a role in treating the congenital alar rim deficiency patient who, without it, would likely end with even worse alar rim retraction particularly if significant tip rotation is also being done. (type 3 alar contour graft) Smaller type 1 or dual retrograde grafts are placed as protection against potential alar rim retraction if a minor rim deficiency already exists. In secondary rhinoplasty when alar rim retraction is present from the prior surgery alar rim grafts directly placed on the caudal border of the lower alar cartilage may be needed for a direct anatomic effect.

While the alar contour graft is non-anatomic in nature it still has a powerful effect on alar rim aesthetics. The only reason to not consider using it in most rhinoplasty surgeries is if no extra septal cartilage is available after having been exhausted from other graft use given that the last graft done right at or after closure is the alar contour graft. This should be factored into the septal graft harvest to ensure there is enough for the ‘final’ cartilage graft needed.