The Use of Platelet Rich Plasma (PRP) in Fat Grafting

Injectable Fat-grafting, also known as lipofilling, has become a standard plastic surgery treatment in a wide variety of aesthetic and reconstructive needs of the face and body. Although technical improvements have increased the concentration of fat cells injected, the amount of fat graft survival is still unpredictable and far less than 100%. 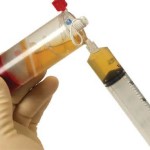 Various methods have been suggested to increase graft take beyond mere concentration including the addition of adipocyte-derived stem cells (ADSC) or platelet rich plasma (PRP) to name the most common methods. How effective these fat graft supplements are, however, is speculative and has yet to be studied in any randomized clinical trials.

Beyond the volumetric enhancement observed after an injectable fat grafting procedure, skin rejuvenation benefits do occur such as improved skin elasticity and suppleness as well as reduced pore size. The presence of ADSC and PRP in a fat graft has been suggested to aid wound healing as well as produce tissue rejuvenation. These supplements achieve these improvements either by improved fat cell survival, stem cell conversion, or new blood vessel ingrowth through the effects of numerous growth factors. They influence the migration, proliferation and differentiation of several cell-types including endothelial cells for angiogenesis and fibroblasts for deposition of extracellular matrix. 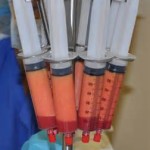 The effects of PRP is probably most likely due to improved vascularization. It is generally accepted that the growth factors present in PRP stimulate wound healing, tissue remodeling and revascularization. Different concentrations of PRP have shown to induce varying effects on fibroblast and endothelial cells.  The ideal ratio of fat to PRP volume has not been established in human fat grafting. One would logically assume that  the more PRP the better. The maximum PRP that can be mixed into a fat graft is going to be a function of the size of the fat graft. In the face higher rations of PRP:fat graft are gong to be able to be obtained. Given that most disposable PRP-kits produce just 3 to 4 mls of PRP concentrate, the ratio could be anywhere from 5% to 15% in facial fat graft volumes of 10 to 35cc injectate.

Several cell culture studies have shown that PRP is a dose-dependent inducer of ADSCs with a two- to fivefold increase in cell numbers when compared to controls. Since increasing the number of ADSCs in a fat graft had been shown to have a positive effect on graft take, PRP offers a relatively simple method to do so. In larger body fat grafting (e.g., buttock augmentation), however, the ratio of PRP to fat graft volume is so low (< 1%) that it would have no effect.

Despite positive laboratory in vitro results of PRP in fat grafting, more recent clinical studies have failed to show a positive difference with its use on fat graft survival. Thus the use of PRP in fat grafting, while theoretically appealing, yet remains to show convincing clinical proof of its effectiveness. But its natural derivation as an extract of the patient and its simplicity of preparation will continue to have clinicians who believe in its science further its use in fat grafting.