The Use of Synthetic Implants In Rhinoplasty 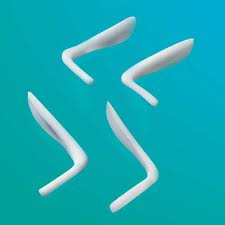 The need for augmentation and support in rhinoplasty is common. Whether it is building up the dorsum, adding supporting to the columella or reconstructing the middle vault with spreader grafts, adding volume is a common cosmetic and reconstructive need. The need for volume is most magnified in many ethnic rhinoplasties where an entire dorso-columellar strut support is needed.

When it comes to grafting in the nose, the choice and debate between a cartilage graft and a synthetic implant is historic. The advantages and disadvantages are well known for each type of implant material. In the end, cartilages grafting is generally considered to be better as a natural material that can integrate although it is harder to use and requires more effort. (and sometimes skill) Conversely, the use of implants is more convenient because it is off-the-shelf and often preformed making it easier to insert and the outcome somewhat more predictable. But it does so at a cost…the risk of infection which is much more rarely seen with cartilage grafts.

But what is the risk of implants in the nose and are there differences in the various implant materials used for these risks? In the August online version of the journal, Archives of Facial Plastic Surgery, a study was published on ‘Complications Associated With Alloplastic Implants in Rhinoplasty’.  In a single academic center, over 650 rhinoplasties done by three different surgeons over a period of nine years was retrospectively reviewed. In 23% of these rhinoplasties cases (151 out of 662 cases),  a nasal implant of either Gore-tex or Medpor was used. Of all the cases, 19 patients (3% of all rhinoplasties in the series or 13% of those rhinoplasties that received synthetic implants) developed infection or extrusion of the implant. Not a single case of infection or extrusion occurred when cartilage grafting from the septum, ear or rib was used. Between the two materials, a higher rate of infection occurred in those cases that used Medpor (20%) versus Gore-tex. (5%)

This is by far the largest report or series on the use of synthetic implants in the nose that I have ever seen. Its findings parallel one basic concept that is well accepted…cartilage grafts are safer and do not suffer the rate of infection or extrusion that a synthetic implant will. What is novel in the study is the much higher rate of complications with Medpor implants than Gore-tex that was seen. Initially this seems at conflict with how Medpor is supposed to work, its porous surface allowing tissue ingrowth while Gore-tex is a solid largely non-porous material. But biology aside, it is important to realize that the body (nose) is not as enamored with tissue ingrowth as one would think. An implant after all is still not a natural material and even with tissue ingrowth it is still largely a synthetic material.

But I suspect the real culprit in the infection/extrusion risks between Medpor and Gore-tex is the size of the implants and how they were used. Medpor comes in a variety of difference shape and sizes for anything from a large dorsal shell implant to columellar struts and batten implants. Conversely, Gore-tex does not come in preformed nasal implants and must be modified from smaller flexible sheets. Gore-tex is also soft and flexible, Medpor is rigid and inflexible from a tissue pressure standpoint. This inadvertently the use of Medpor implants almost always results in larger implanted volumes with more tissue push/strain than Gore-tex. This is a set-up for a higher complication rate.

Interestingly this study did not look at the use of silicone implants which would be the most common alternative in dorsal and dorso-columellar  augmentation needed in many ethnic rhinoplasties. One could speculate what those complications would be. But it would be far to say that cartilage grafts would still have a near zero incidence of infection/extrusion.

In my experience, there is a small role for synthetic implants in rhinoplasty but judicious application must be done. The implant should never be close to the internal nasal mucosa, should be small in size and should not stress the overlying nasal skin in any way. They are also probably best avoided in any type of revisional procedure. Cartilage grafts, despite the understandable aversion of patients to them (particularly rib), are always safer and have negligible risks of infection and long-term exposure.