The Wrap-Around Jawline Implant for Men

The use of facial implants for male face enhancement is common and the traditional areas include the chin, cheeks, and jaw angle areas. Every now and then, I get a request or see a patient who really enhancement in a different area of the jaw….the vertical dimension. Making the jawline longer in the vertical dimension to increase lower facial height and put the face in better overall balance. Most of these unusual cases exhibit an underlying jaw deficiency problem, often with a significant overbite relationship at their teeth, indicating a jaw that is both short in the front-back dimension (horizontal development) and in the up and down dimension. (vertical development at the ramus)

In correcting this type of jaw problem, the ideal solution for most of these patients is a course of orthodontics followed by traditional orthognathic surgery. While this may be ideal, most of these patients are beyond their teenage years and do not want to make the multi-year investment of time to make a formal anatomic correction based on the bone. A ‘short-cut’ solution is to augment the deficient areas with a synthetic implant. While the actual procedure is not difficult to do, the problem is in finding a commercially-available implant that will match the patient’s problem. When it comes to vertical lengthening of the mandible from one side to the other (wrap-around), there is no such off-the-shelf implant option.

Sometimes a standard chin implant, combined with a jaw angle implant, that is positioned low on the bone below the native bone edge may suffice. But there will be a gap between where the chin implent ends and the jaw angle begins. In some cases, it may work but it is a piecemeal approach that is fraught with problems such shifting of the implants after surgery. (in this case , the jaw angle implant) 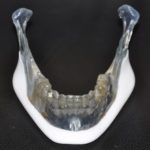 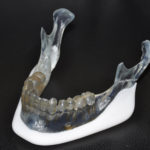 A better solution is to have a custom wrap-around jaw implant made off of a computer-generated model. A 3-D CT scan can be done from which an exact replica of the jaw (mandible) can be created. Then a mock-up of the implant (by me) can be done in acrylic to create a one-piece wrap-around jaw implant that sits on the inferior border of the jaw, lengthening it throughout. The acrylic mock-up is then sent to a manufacturer where they make a formal silicone rubber implant. While a lot of work is done on the front end, the implant is easily placed through a small incision under the chin. (it is flexible so it easily folds on itself to be easily inserted through a small incision) It is fixed with a single screw underneath the chin so it does not ever move. It really is nothing more than a long extended chin implant that runs from one jaw angle to the other, but is on the bottom edge of the bone.

I have done this procedure many times over the years and found it to be quite successful. There is some significant costs up front from the CT scan and implant design and manufacturing vbut it is the best way to go when one is looking for this type of jawline augmentation change.