Thigh Implants for Aesthetic Augmentation of the Upper Leg

There are a variety of solid body implants available for augmentation of various muscles for aesthetic contour changes.. Most well known are chest (pectoral), buttock and lower leg (calf) implants. Lesser well known ones involve the arms (biceps and triceps), trapezius and shoulder (deltoid) implants. 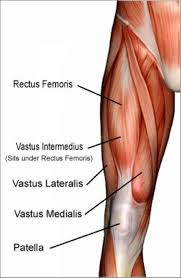 But this is not the complete list and one of the most least well known and done is that of thigh implants. The largest implantable muscle of the upper leg is that of the rectus femoris. The rectus femoris is one of the four quadriceps muscles. (the others being the vastus medialis, intermedius and lateralis)  It is a large muscle that occupies much of the anterolateral thigh and has attachments superiorly to the anterior superior iliac spine and inferiorly via the quadriceps tendon to the kneecap. (patella) Its large size, fusiform shape and encasement in fascia makes it the muscle to augment for a thigh augmentation effect.

Like the shape of the muscle that it is designed to augment, thigh implants have a similar fusiform shape and are placed in a subfascial pocket on top of the muscle. I prefer to place many perfusion holes throughout the implant at the time of surgery to permit fibrovascular tissue ingrowth through the implant and between the two sides of the pocket. Placing an implant under the fascia on top of the muscle will also explain why there will be some temporary stiffness of hip-thigh flexion and knee extension after surgery. (although my observation is that the postoperative recovery to less disabling than that of calf implants)

To place thigh implants a curved incision of 5 to 6 cms in length needs to be placed at the superolateral aspect of the implant pocket. The fascia is entered directly beneath the incision and the subfascial pocket developed with long dissectors. Because of the length of the pocket (usually around 26 cms) it some cases it may be necessary to place a small counter incision closer to the knee during implant placement to ensure that the lower edge of the implant is adequately unfurled and is laying completely flat at the bottom of the pocket. (the need to do so depends on the thickness of the lower edge of the implant)

Thigh implants offer the ability to provide increased volume to the upper leg. Since the rectus femoris is the largest muscle of the upper thigh it provides the greatest contour change. Placing the implant in the subfascial location reduces the risk of seroma formation and visible implant edging.