While the aging of the face seems the most visible and subsequently the most treated by plastic surgery, it is not the only visible and unclothed body part that ages. I have seen many older women whose face is quite smooth because of numerous facial rejuvenation procedures but whose hands give their age away. The hands simply don’t go with their face, age or lifestyle. The hands are as much exposed to the elements as the face but are far less pampered and protected.

Like the face, the hands age in a similar way. They lose volume through fat atrophy, the skin loses elasticity and becomes wrinkled and age spots appear. As the fat layer in the hands disappears, which is already thin to begin with, the skin becomes partially translucent and thinner. This creates the classic skeletonized hand appearance where the veins and tendons are clearly visible. The rows between the hand bones become sunken in. The skin when you pinch it on the back of the hands doesn’t bounce back due to loss of elasticity.

The aging of the hands can clearly be seen in many tabloids and magazines. Famous aging women with youthful faces and great bodies have old-looking hands. Their veins can clearly be seen bulging out on their emaciated hands. This may be why some performers wear fingerless gloves in an effort to hide the back of their hands.

Treatment of the aging hands can be done through various rejuvenation methods. The most common treatment by far is for the brown age spots or sunspots. Intense pulsed light (IPL) or broad band light (BBL) can quickly remove brown spots, many of which can be eliminated in a single treatment session of about 15 minutes. It turns them dark and speckled and they then fleck off over the next week or so. A touch-up treatment may be needed a month later to clear what remains. It is important to wear sunscreen on the back of the hands afterward to prevent reflaring of some of the brown spots. A minimum of SPF50 sunscreen should be used.

These light therapies can be supplemented with laser resurfacing to help tighten the loose skin and reduce the wrinkling. Fractional is the best laser method because it has enhanced collagen stimulation effects. Laser resurfacing can be combined with light therapies to get a better overall effect than either one alone. Laser treatments take the same amount of time to do, about 15 minutes per hand. 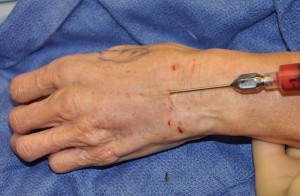 Most so-called ‘hand lifts’ employ the use of injectable fillers to plump out the atrophic subcutaneous tissues and ‘deskeletonize’ the back of the hand. Fillers like Juvederm, Restylane and Radiesse can be quickly injected in the office for an instant filling effect. Placed right under the skin near the wrist level, they can be pushed into the indented rows once injected right under the skin. While they are not permanent the filling effect will last anywhere from six months to a year.  Fat injections are another option and generally create a better result because the volume injected is greater. It is a minor surgical procedure where fat is harvested from inside the belly button, concentrated, and then injected just like synthetic fillers. Unlike off-the-shelf fillers, fat has the potential to be longer lasting.

Other hand treatment options included the use of skin tightening devices like Exilis and the sclerosing of hand veins by injection or their actual extraction like varicose veins of the legs. One treatment option that is not used is a formal hand lift where skin is excised and the skin tightened. While it can be done by making an incision at the wrist level, the scarring is not acceptable.

A complete hand rejuvenation approach is the combination of injectable filling, light therapy for brown spots and fractional laser for wrinkling and skin tightening. Both hands can be treated in one hour in the office with complete healing in just one week.