The most common complication in facelift surgery is postoperative bleeding which leads to a hematoma. It is more common in men than women due to the preponderance of blood vessels from beard hair follicles and the male propensity for elevated blood pressures both before and after surgery. Various ranges of hematoma occurrence are cited after facelift surgery from 1% to 5% but suffice it to say it is an issue of significance that merits strategies to prevent it.

One recent pharmacologic approach has been the intraoperative use of tranexamic acid. (TXA) This is a well known antifibrinolytic agent that has been around for some time. But its use in plastic surgery is recent and, as a result, there are no established protocols for how it would be best used. Some plastic surgeons mix it with the standard lidocaine and epinephrine solutions which are injected before making an incision. Others use it for irrigating under the skin flaps prior to closure. 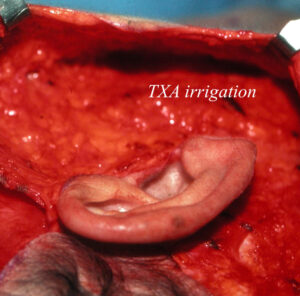 In the October 2020 issue of the European Journal of Plastic Surgery an article was published on this topic entitled ‘Tranexamic acid: a simple way to reduce drainage and bleeding in rhytidoplasty’ In this paper the authors evaluated the use of TXA irrigation in thirty (30) patients undergoing facelift surgery. A prospective clinical study divided facelift patients into two groups: those that received a 2.5% TXA irrigation solution and a control group who used standard hemostatic measures. Both group patients had drains placed. Thus 24 hour drain output and the occurrence of hematoma could be determined.

Their results showed that the TXA irrigation group had drain outputs in the first day after surgery that were reduced by over 70% (average of 10 mls, range 8 to 22 ml) compared to the non-irrigation group. (average of 35 ml, range 19 to 50 ml) The rate of hematoma formation was lower in the group with intraoperative local irrigation with TXA.This small clinical study seems to support that TXA irrigation results in less bleeding as evidenced by smaller drain outputs and a lower hematoma rate. 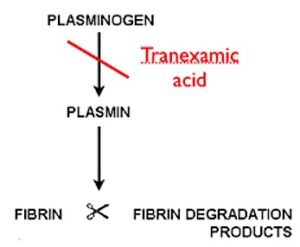 Unfortunately such a small sample size does not conclusively prove that TXA is effective at lower facelift hematoma rates. But when the effectiveness of a treatment approach is uncertain the question then becomes what are the side effects with its use? TXA works by blocking the effect of plasminogen on plasmin which ultimately activates fibrin for clot breakdown. Thus it is a clot stabilizer. Thus when used topically as a low dose irrigation solution its potential side effects would seem be virtually nil. This has already been shown when TXA is applied topically to skin in the treatment of melasma…even though this is not exactly a similar topical site in regards to absorption potential.