Correction/repositioning of sagging brows is done by well known browlift procedures. The vast majority of browlift surgeries are done in women with access to do the procedure coming from above in and behind the frontal hairline. The three different female browlift techniques (coronal, pretrichial and endoscopic) are chosen based on forehead skin length and the position of the frontal hairline.

Browlifts in men, however, are more challenging because of the typical lack of a stable hairline, poor hair density or no hairline at all. Thus, most men can not have a superior scalp approach due to concerns of visible scarring or disturbed hairline concerns. Browlifts in many men have more limited options and include either a mid-forehead, direct (superior eyebrow hairline) or a transpalpebral incisional approaches. 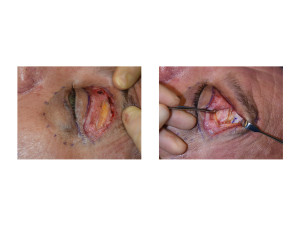 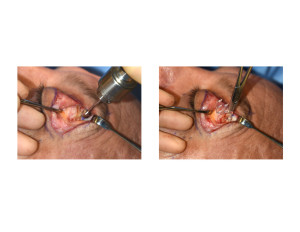 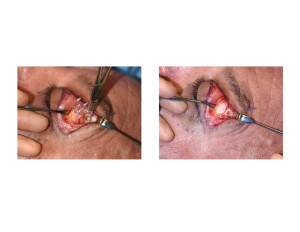 Once the Endotine device is inserted, the outer brow tissues are lifted and suspended on the device’s prongs. The soft tissue are then closed over the device and the upper blepharoplasty incision closed.

The transpalpebral browlift is essentially a ‘push’ browlift from below. This is stark contrast to the more traditional browlift methods which are ‘pull’ procedures from above.  The Endotine device makes this possible. It is composed of a resorbable polymer material which breaks down and is absorbed completely within 6 to 9 months after it is inserted. This should be enough time to allows the brow lift tissues to scar down and heal to the bone in a slightly more elevated position.

Patients will feel the device under the skin for a few months after the procedure although it is not visible on the outside. For men the transpalpebral approach, while having a modest result, avoids scar concerns at the eyebrow or on the forehead which can take a long time to mature and their imperceptibility is not always assured.