Treatment of Self-Harm Forearm Scars with a Rotated Ultrathin Autograft 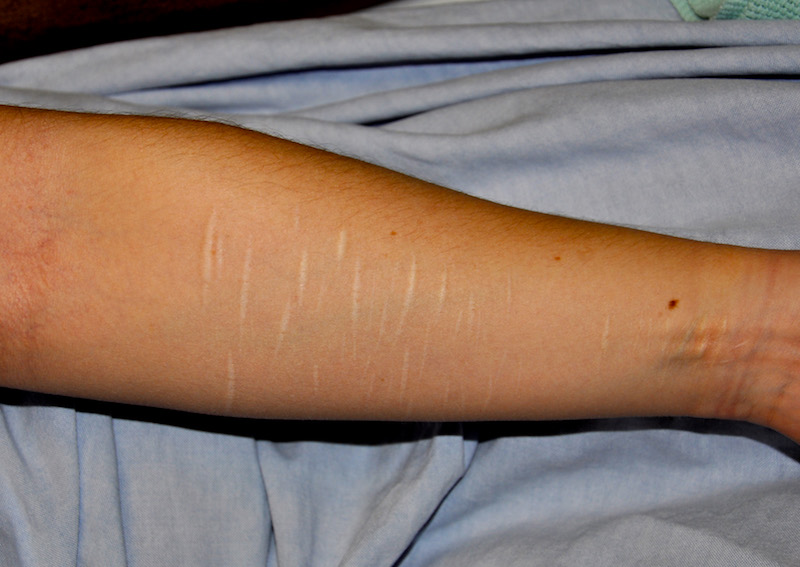 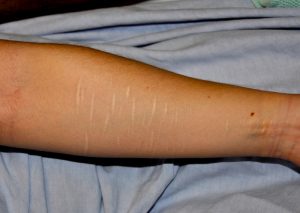 Self-harm scars are a well known form of deliberate injury, usually to the forearms and in young people. These scars are often not an attempt at suicide but an expression of emotional/psychological distress. Their appearance is classic in that they are multiple and in a perpendicular direction to the longitudinal axis of the forearm. There are usually partial thickness skin injuries that can be closely spaced together. Many are multiple in number and most are flat and not hypertrophic.

Because of their location in a highly visible area they can be easily seen by others, are often recognized for what they are and, at the least, can be emotionally difficult to explain. Standard scar camouflage/reduction techniques such as excision, microneedling and laser resurfacing will simply not work to reduce their appearance.

In the 2021 Plastic and Reconstructive Surgery Journal Global Open an article on this topic was published entitled ‘Treatment of Deliberate Self-Harm Scars with Rotated Thin-Skin Graft and Minced-skin Graft’. In thus paper the authors treated five female parties  with self harm forearm scars. The scar site was  cut with a dermatome at 250 microns. The scarred skin was removed and the scars within the graft were excised and closed. The scar left on the skin’s surface was flattened with scissors. The skin was rotated 90 degrees and then replanted. Because the removed graft did not have a perfect size match when replanted (some recipient areas was not covered and others had graft overlay onto normal skin) the overlay portion was excised and used as a minced-skin graft. (cut into very small pieces and then placed into the open areas). The grafted forearm site was then covered with non-adherent gauze and an overlying bolster dressing.

In all five cases treated the treated forearm scars were camouflaged and had a much better aesthetic appearance. As would be expected with any form of sin grafting initial color changes (redness, hyper pigmentation ) took the to resolve. No scar contracture or hypertrophic scars occurred.

There are numerous methods to treat self-harm scars which almost always occur on the non-dominant forearm but can appear on both forearms as well. Individually cutting out the scars in never a good option as a large number of smaller scars does not allow it to have a different appearance. Full-thickness excision of the forehead scar region in an irregular pattern and replacing it with a split-thickness skin graft is effective as it allows the patient to provide a different explanation for why this patched skin grafted area exists. (e.g., traumatic injury) At the least it removes the appearance of the self-harm scars and can allow the patient to psychologically move past it. But it does require a donor site and is really trading off one scar problem for another.

In this paper the self-harm scar area is treated with the objective of making it look better without the need for a donor site or creating an obvious patched appearance. (improvement of the scarred area without the need for a remote tissue transplant and donor site scar) One of the benefits of reusing the excised skin is that a better color match will result than skin taken from anywhere else on the body.