A tummy tuck can produce a dramatic change in the shape of one’s abdomen and frontal waistline. By removing a large horizontal ellipse of loose skin and fat, a tightening and flattening effect is seen when the remaining abdominal tissues are put back together. Such reapposition is known as a transposition of the remaining upper abdominal fasciocutaneous flap downward towards the pubis. The union of the abdominal flap downward towards the pubic area creates the location of the horizontal incision line. 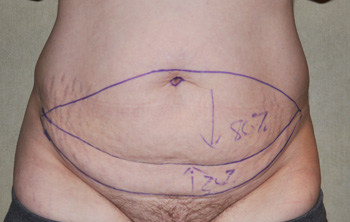 While how the wound is closed over the area excised in a tummy tuck may seem irrelevant, these tissue movements will make some anatomic changes in the shape of the pubis. The upward movement of the tissues below the abdominal cut out will create differing degrees of a pubic lift. With the lifting of the pubic also comes a change in the pubic hairline as well. It will move upward to meet the incision line creating lengthening and an elevated position of the pubic hairline. 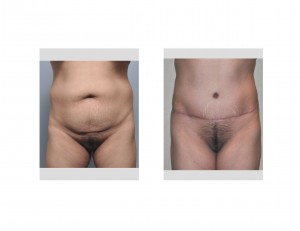 While the lifting and flattening of the pubic mound will be a benefit to most tummy tuck patients, the elevation of the pubic hairline may be a nuisance. The pubic hairline will meet the incision and there will be no separation between the two. For some women this may necessitate hair removal methods to create a few centimeters of separation between the incision and the upper pubic hairline. Laser hair removal is the most common method used and can be particularly effective if one has a dark pubic hair color. 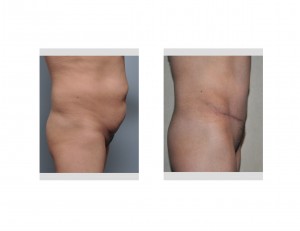 The incision line of a tummy tuck is usually the tightest and most constricted area along the newly created waistline. Despite getting a concurrent pubic lift during a tummy tuck the elevated pubis may appear as a bulge that sticks out further than the incision line. This can be aesthetically unflattering for some women in tight clothes. This can be secondarily corrected by liposuction which can make the pubic bulge completely flat and in better profile to the incision line. When such pubic bulging is recognized before undergoing a tummy tuck, it can be simultaneously treated by pubic liposuction during the tumm y tuck once the incision is closed.