Rib removal surgery is highly misunderstood from both surgeons and the public alike. Often viewed and described as an extreme and dangerous, it is neither. While it is for the most motivated female who seeks maximal reshaping of their waistline, it is no more radical than some other cosmetic body surgeries.  But because it is rarely performed by most plastic surgeons, its unfamiliarity leads to misconceptions about it.

The concept is that removal of the lower ribs can create a more narrow waistline. Understanding the anatomy of the lower ribs can appreciate how this may be possible. Ribs # 11 and 12 are the true free floaters in that they have no anterior connection. They are acutely oriented downward, often as much as 60 to 75 degrees, an angulation that is not shared by all other ribs above them. Their projection, while not normally felt, can serve as an anatomic obstruction for those women who seek a maximal reduction of the anatomic waistline at the level of the umbilicus. Their outward projection onto which soft tissues like muscle are attached keep the anatomic waistline at a certain width. Once their projections are removed the waistline can fall further inward.

In rib removal surgery it is important to appreciate that only a portion of the ribs are removed. The more appropriate term would be subtotal rib removal or resection. Only the most outer or distal portion of the ribs are taken. There is no benefit to chasing the rib resection back under the semispinalis muscle near their vertebral facet attachments. Only about 5c to 7cm lengths of the rubs are removed. Thus many soft tissue attachments remain for core body support. 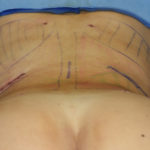 The effects of lower rib removal does create a very visible and palpable waistline reduction as evidenced in performing the procedure. This effect is not imaginary or theoretical but one that I have consistently observed. It makes biomechanical sense since some of the support offered by the most outer portion of the ribs is lost at the level of the umbilicus.

Such rib removals are perfectly safe. The biggest fear when removing any portion of the rib anywhere is the potential for violation of the pleura, the lining of the lung, and the development of a pneumothorax. But the lower two ribs are below the level of the apices of the lungs so this is not an issue. It starts to become more relevant with rib #10 where very careful dissection is needed around the inner surface of the rib in its removal.

Waistline reduction by rib removal would be considered an end-stage body reshaping procedure. There are numerous other more conventional waistline reduction methods such as low body fat, exercise and even aggressive and focused liposuction. For the vast majority of women these methods produce very satisfactory waistline shapes. But for those women seeking a maximal change, ribcage modification of the lower ribs can be an effective procedure.