Implants are a common method of aesthetic facial augmentation. While they have been around for roughly fifty years, there are still some basic misconceptions about them. One of these often stated misconceptions is that they cause bone erosion. This is most commonly discussed about chin implants, but by association, all other facial implants (e.g., cheek implants) are implicated as causing the same effect as well.

The perception of bone erosion is what has historically been seen in lateral plain view films of chin implants or when surgeons remove/replace them. Calling these observed bone changes ‘erosion’ is not only biologically incorrect but it conveys that some treatment is needed for it. To clarify, bone erosion indicates an active inflammatory process which is progressive and is the direct result of a reaction to the implant material. As an active process it does not stop until the offending material is removed or there is complete loss of surrounding bone. The bone around the implant in an active inflammatory process would be soft and mushy at the implant-bone interface.

It is clear on careful thought that what is seen in both x-rays and at implantation sites is not an active inflammatory process. Rather it is a passive adaptation response to the implant which is self-limiting. The implant-bone interface is hard and what the implant has done is place an ‘imprint’ of its shape on the bone. This undoubtably occurs as a response to the pressure that the implant has placed on the surrounding tissues by its presence. It is important to remember that the implant was not meant to be there. So its placement into the tissues is a disruption of its natural ‘biologic boundary’. To alleviate this tissue pressure induced by a bone-based implant the body resorbs some bone underneath it, which stops when the pressure is seen as alleviated. This is a response to aesthetic implants placed anywhere in the body, it is not unique to just facial implants. 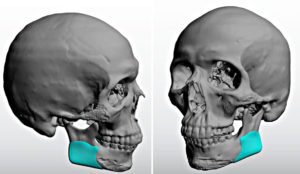 An appreciation for the concept of facial implant imprinting can readily be seen today in 3D CT scans. In looking at thousands of 3D CT scans of facial implants, where the implants have been digitally removed, imprints can be seen at any location on the facial skeleton. From chins to cheeks to jaw angles it is seen in every implant that is placed. This shadowing of the implant outline on the bone is its imprint with 1mm or so of implant settling into the bone. There may be some reactive bone formation around the edges of the implants in certain facial locations that cab be robust. (jaw angles and chins) But this is the result of the periosteal elevation and the implant acting as a spacer, keeping the periosteum elevated over the implant and providing a pathway for bone formation to follow.

This facial implant imprinting is not unique to just silicone material. It is seen in all facial implant materials from Medpor, ePTFE to even titanium. It is not the material that is the source of imprinting, it is its very presence in tissues which were made for the autologous tissues that it already contains.