Understanding The Effects of Shoulder Narrowing Surgery By Angle Geometry 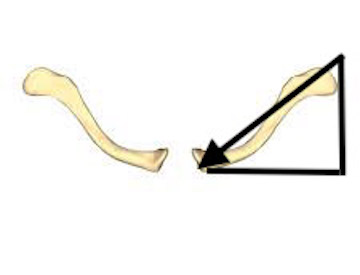 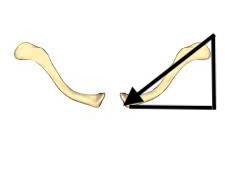 Shoulder reduction or narrowing surgery works by shortening the length of the clavicle bone holding it out. While the clavicle may appear relatively straight in front view pictures and x-rays, it is far from being so. Because the clavicle is not straight, but rather a lazy s-shape, shortening its length does not produce a 1:1 ratio of bone removal to shoulder width reduction. Based on a geometric assessment from the superior view and using a 90 degree triangle shape, it is easy to see that shortening its hypotenuse is not going to have the exact same horizontal effect as shortening the adjacent horizontal limb.

While no studies have ever been done on what the exact shoulder width reduction is with clavicle shortening, I am fairly certain it is in the 0.8 to 0.9 ratio. But regardless of the exact shoulder width reduction achieved it is also apparent that there is some initial anterior rotation effect on the shoulder position. This creates a rounder shoulder shape effect which also contributes to a more narrow shoulder appearance.

The effects of a more anterior shoulder position is most manifest in the immediate and early postoperative period as this is also the position that feels the most comfortable. It is the equivalent of putting your elbows in the palm of each hand in a crossed arm posture. This pulls the shoulder inward and takes the pressure (pull) off of the pectoralis major muscle attachments. (some of which have been released and put back to gain access to do the bone removal) But as one heals and the arm range of motion is allowed to increase this rolled in shoulder appearance improves and ultimately becomes negligible in most patients.