In Volume 3 Number 2 2012 issue of Plastic Surgery Pulse News, an article appeared entitled ‘A Novel Correction of Chin Ptosis By Vertical Wedge Excision of Subcutaneous Soft Tissue’. Using a single patient example, the authors describe a vertical midline wedge excision of soft tissue. In this technique the vertical laxity of the ptotic chin pad is tightening along the inferior border of the chin mental border while correcting the horizontal tissue laxity as well. The technique also improves anterior chin projection and softens the labiomental crease as well. This vertical wedge of mentalis and soft tissue when brought together creates a clothesline effect that helps reposition and suspend the ptotic tissues up over the lower anterior border of the mandibular symphysis. In the process, the soft tissues of the chin pad are rotated upward, augmenting the anterior chin and re-creating the labiomental fold. Any excess skin and subcutaneous fat is then trimmed in a horizontal fashion in the submental region. 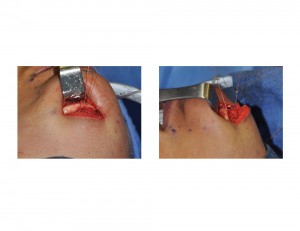 This vertical wedge excision technique for chin ptosis correction is based on tissue excision rather than tissue resuspension. That is a fundamental difference and requires an appreciation of whether the patient’s chin ptosis has a component of excessive chin tissues or not. By using a vertical excision of chin pad tissues, a vertical triangular excision creates a clothesline effect that allows the remaining chin pad to be positioned superiorly and anteriorly. It is easy to see why this technique could cause an abnormal bunching of chin tissues if the chin ptosis was caused by laxity and not excessive tissue as well. The authors acknowledge that this technique is not useful for every chin ptosis problem, particularly when there is already too much chin projection present.

When it comes to resection of the chin pad, it can be done horizontally (under the chin), vertically (as shown in the article) or through a combined vertical and horizontal technique. (inverted T) There is no question that adding a vertical direction to the chin pad excision provides an additional element of chin pad reduction that is helpful.