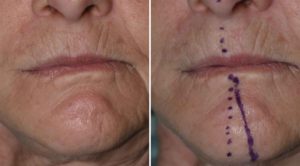 Chin asymmetry is easily seen as the most projecting part of the lower face is shifted off of the facial midline. The central chin point is shifted to one side or the other and can occur for variety of reasons. The most common reason is developmental or traumatic where the sides of the jaw have different lengths, most commonly because there is a shorter side due to developmental deformities or from traumatic injuries/fractures.

In cases of chin asymmetry due to shortening of one side, realignment of the chin can be done by a unilateral lengthening of the shorter side. This is called an opening wedge genioplasty which is performed through an intraoral approach. Just like a traditional sliding genioplasty a horizontal bone cut is done well below the mental foramens and at a low anteroposterior angle as possible. Once the bone is down fractured (mobilized) the the longer or normal side is fixed with a single small two-hole plate and screws with bone to bone contact. This becomes the hinge point at which the opposite shorter side is opened.

The opening wedge distance on the shorter chin side that it is vertically lengthened is determined by the distance the central chin point is off the facial midline. In theory this is a 1:1 ratio, although like an obtuse or scalene triangle, the opening wedge usually has to be slightly greater than the amount of midline asymmetry.

The opening wedge is then stabilized with a much longer plate than was used on the opposite hinge point. Cadaveric corticocancellous bone pieces are used to fill in the empty intrabony wedge space to ensure healing. It is important to fill out the wedge defect all the way out to the inferior border to avoid a step-off deformity.

The vertical opening wedge bony genioplasty is a useful technique for those chin asymmetries which are caused by a shorter sided jaw segment.