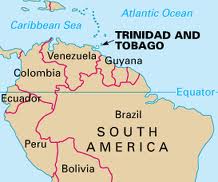 The Republic of Trinidad and Tobago lies in the southern Caribbean just off the coast of northeastern Venezuela. It has a population of 1.3 million people in a land mass of just under 2,000 square miles. The vast majority live on the larger Trinidad island. (96%) Unlike most of the English-speaking Caribbean, it is industrially strong with petroleum as its base. As a result, it is one of the wealthiest and most developed nations in the Caribbean with a high per capita annual income of over $20,000.

Board-certified plastic surgeon, Dr. Arno Schliech, has been in practice in Port-Of-Spain for the past five years. While of German birth, he is married to a Trinidad physician which explains his island presence and familiarity with its cultures and people. When it comes to plastic surgery, the most common procedures in the Caribbean in general and Trinidad in particular is body contouring. The climate and the clothes play a big role. The most popular body contouring procedures are liposuction,, tummy tucks and breast augmentation and breast reduction. The big trend now is gluteal reshaping with fat transfer (aka Brazilian butt lift). This is a great procedure to do in Trinidad and the Caribbean as women there are already curvy, have some fat to harvest and the results are very satisfactory, which makes the procedure very rewarding to do.

Most of patients seeking plastic surgery come from the islands although medical tourism from the US, Canada and the UK is growing. Amongst these patients, 99% have dark skin – Afro-Caribbean, dark East Indians, Creole etc. Rarely is anybody less than a Fitzpatrick V skin classification. As a result, surgical incisions are a big patient concern.While most incisions heal well eventually, more effort is put into various scar treatments to optimize their final appearance.

Facial aging occurs differently on the islands. Dark skinned people do age differently and much slower, at least in the face. The bone structure is also different. Most facelift and periorbital rejuvenation patients are predominantly medical tourists from the US or Canada. The island population gets to this stage probably fifteen or more years later than Caucasians and then often have a reduced interest in this kind of surgery in favor of body contouring.

Gynecomastia in men is a frequent problem, particularly in East Indians. Whether it actually occurs more frequently or is a function of Caribbean men spending a considerable amount of time bare chested is uncertain. But Dr. Schleich states that he operated on more gynecomastias in his first year in Trinidad than during his previous career. Female breast reduction is also very common but all island governments and health systems consider it as a cosmetic procedure and don’t pay for it.

The most difficult aestheic problem in Trinidad and in the islands in general is the high rate of permanent facial disfigurement resulting from acne scarring, The dark skin pigments limits the traditional use of treatments such as laser, pulsed light and dermabrasion. So effective acne scar treatments are lacking. Conversely the darker and thicker Caribbean skin makes cellulite a very rare problem.

Private hospital services in Trinidad are relatively expensive compared to the average per capita income of the population, but mostly quite a bit less than in the U.S. Some of typical procedure costs for aesthetic plastic siurgery are breast augmentation ($5,000), rhinoplasty ($6,500) and liposuction. ($5,500)