Background:  The shape of the eye is influenced by all the tissue elements that comprise it. Its foundation is that of the bone, in particular the circumferential bony rim onto which much of the eyelids attach. It is not surprising therefore that eyelid shape, particularly that of the lower eyelid, is directly influenced by that support.

This is appreciated in the well known negative orbital vector concept whose physical  finding is a significant one in lower blepharoplasty surgery. Lacking sufficient infraorbital rim-anterior malar horizontal bony projection any stress placed on the lower eyelid through scar contracture from skin removal and eyelid tissue manipulation runs the risk of resulting in postoperative ectropion. Adding support to the infraorbital rim which enhances projection is an established treatment approach for either lower blepharoplasty surgery, changing the tilt of the outer aspect of the eye corner or to enhance the appearance of the upper midface.

Less well appreciated about skeletal deficiencies of the infraorbital rim is the shape of the bony orbit from the front view. Having seen many 3D CT scans for orbitofacial surgery, negative orbital vector patients often have a downward slope to the outer aspect of the infraorbital rim. This is usually associated with rounding of the lower eyelid and increased scleral show laterally which creates a naturally occurring lower eyelid sag.

Such infraorbital rim shapes would be consistent with underdevelopment of the zygomaticomaxillary process which constitutes the outer half of the infraorbital rim. With lack of adequate development the zygomaticomaxilary complex (ZMC) is pulled back and down…much like what happens in a ZMC fracture although to a much lesser degree. Understanding the extent of the three-dimensional bone deficiency becomes paramount in providing an optional approach for augmentation of the bone that will positively influence the shape of the lower eyelid.

Case Study: This male presented for infraorbital rim-malar augmentation to improve both his negative orbital vector and flatter cheeks. He had a prior history of a LeFort I advancement for lower midface correction at which time maxillary implants (modified submalar cheek implants) were placed to take the correction as high as possible above the osteotomy line. While good improvement was obtained within the scope of what orthognathic surgery could achieve, what lay above remained with inadequate horizontal projection. A 3D CT scan showed significant horizontal and vertical deficiencies of the infraorbital rims combined with inadequate malar projection. 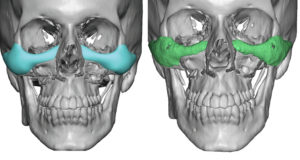 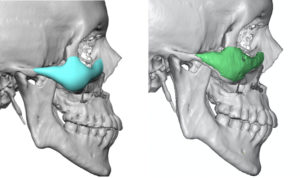 The custom implants were implanted through lateral lower eyelid incisions with a small lateral canthal extension. This provides linear access for dissection and placement of what is essentially a long curved implant. It is of critical importance that the ends of the implant, medially by the nasal bones and laterally at the end of the zygomatic arch, are fully dissected and the ends are laying flush on the bone.

A postoperative 3D CT scan revealed good positioning of the implants on the bone and as as close to their designed pbone position as was possible. Such implants appears on scans not as they do on the implant planning pictures. They have a more indistinct shape which is a artifact of the imaging process. They appear solid and perfectly smooth (as they do in surgery) on the planning pictures because they are painted on as a design.

With 3D infraorbital rim augmentation comes improved lower eyelid support even if no additional additional procedures are done to the eyelid itself. The volumetric addition from below helps push up the lower eyelid laterally and decreases scleral show.

1) The shape and projection of the infraorbital-malar bone has a major influence in eye shape.