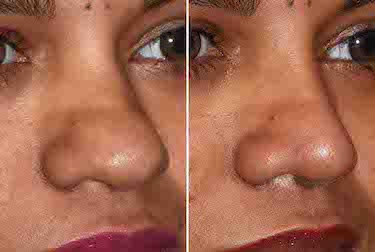 Aesthetic rhinoplasty is one of the oldest forms of facial plastic surgery and has been done for over one hundred years around the world. It has been performed in many different ethnic groups by surgeons of those same ethnic groups. As a result nuances in the desired shapes of the nose and the techniques to achieve them may be well known within their geographic regions but less appreciated elsewhere.

In the U.S. where the largest influx of a new population comes from south of the border, performing rhinoplasty on this mix of patients is now commonplace. While the term Hispanic is often used to conceptualize this group of ethnic rhinoplasty patients in the U.S., this term has its inaccuracies. It is better called Latino as this term is more of an inclusive spectrum of the wide range of nose shapes that can present for treatment.

In the October 2019 issue of the journal Plastic and Reconstructive Surgery, an article on rhinoplasty entitled ‘Recognizing Racial Heterogeneity in the Latino Nose: Aesthetic Concepts for an Individualized Approach’ was published. In this paper the authors looked at primary rhinoplasty patients that were Latino and non-Latino and characterized their shapes and how to to treat them.

They found some of he basic characteristics of the Latino nose is thicker skin, a wider and prominent bony vault often with a dorsal hump, rounder tips that lacked projection and were underrotated, thick hanging alae with alar flare and an overall weak cartilage support. But within these general characteristics is a broad spectrum of nasal shapes, nasal skin covers and underlying framework support. 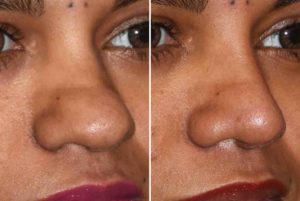 As the authors discuss, I find that the Latino patient almost always comes in with ideal nose shapes of Latino celebrities. Often their preoperative nasal shape and skin is far removed from every achieving that type of result and it becomes important to establish realistic expectations. While such an approach is a given, because the Latino patient may or may not have a good understanding of the English language, it is easy to have a ‘miscommuncation’ or failure to relay an understanding of what the limitations of rhinoplasty surgery is.

The biggest challenge in Latino rhinoplasty is to get good tip aesthetics with a thick skin cover and weak tip cartilages. Adding support through cartilage grafts and tip suturing is predictable but what the skin will ultimately do in terms retraction around the reshaped tip cartilages is not. Aggressive defatting of the tip and postoperative taping are what can be done in the short term. Mixtures of Kenalog and 5FU for injection therapy can be done in the intermediate recovery period. Preoperative counseling in particular about the postoperative tip shape is critical and most female patients are not to get a slim sculpted tip shape that they ultimately desire.

Hump reduction is part of most Latino rhinoplasties. In men I have not observed the desire to maintain any semblance of a dorsal hump but that is a patient’s individual preference and can certainly be done. Women universally prefer a concave dorsal profile which may or may benefit from radix augmentation if teh dorsum is already low.

Weak cartilage support is the norm and the smaller and weaker septum can not be counted on as a great graft harvest site. While the historic option was an autologous rib graft, the authors have pointed out the benefits of cadaveric costal grafts which today offer superior results to the historic processing methods of cadaveric cartilage grafts. While the Asian rhinoplasty patient often favors a rib graft, the Latino most frequently is more adverse to that cartilage graft concept.

Almost every Latino rhinoplasty would benefit by nostril narrowing. I have had a few that felt their wider nostrils were not a concern. But it is appropriate to advise that they may feel differently later when the nose is more overall more narrow and the nostrils may then look perceptibly wider. But secondary nostril narrowing can always been under local anesthesia later should the patient see it differently later.