Management Strategies for the Pollybeak Deformity in Revision Rhinoplasty 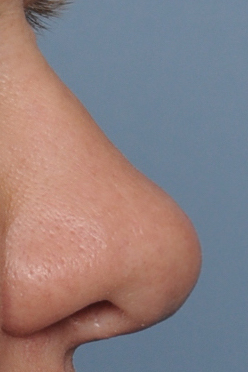 There are many reasons for a revision after a primary rhinoplasty. One of the most common causes for dissatisfaction with a primary rhinoplasty result is what is known as the pollybeak deformity. This is where persistent fullness remains in the supratip area creating a rounded appearance to the tip of the nose in profile. This makes the nasal tip look under rotated and ill defined. It creates the illusion of tip ptosis due to the absence of a defined supra tip break.It also disrupts a smooth dorsal line from the radix to the tip with projection of the supra tip beyond this line.

The cause of a postoperative pollybeak deformity is multifactorial. Excessive scarring, lack of adequate tip support and a high remaining septal angle are the most common reasons. Lack of tip support can be avoided by the use of a columellar strut graft and avoiding excessive weakening of the lower alar cartilages by over resection. Inadequate resection of the septal angle as the dorsum is reduced is an underlying cause beneath the tip that can cause it to protrude outward as the swelling subsides. The thick skinned nose and the nose that congenitally lacks good tip projection is particularly prone to this problem with the development of a profound scar reaction in the supratip area.

In the April 2020 issue of the journal Plastic and Reconstructive Surgery an article was published on this topic entitled ‘Rhinoplasty Refinements: Addressing the Pollybeak Deformity’. In this paper the authors provide a case study of a secondary rhinoplasty to address multiple concerns one of which is a pollybeak deformity. An open rhinoplasty approach was used with scar tissue removal over the dorsum. Increased tip support and septal cartilage grafting helped resolve the supratip shape and deviated nose issues. 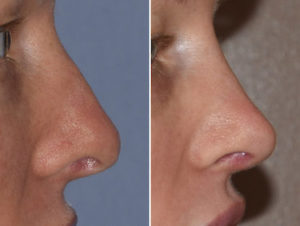 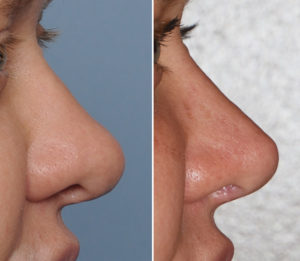 While some supratip deformities are temporary and can be treated by steroid injections, ones caused by structural issues is persistent. Effective management through an open approach can be done with resection of excessive scar tissue, cartilage dorsum reduction and tip projection techniques (supratip advancement suture and augmentation of the alar cartilages by grafting) in cases where residual septal cartilage cxists in the supratip area. In cases of an overresected supratip and inadequate tip projection, cartilage graft tip augmentation and a septal extension graft is needed.

Obliteration of any dead space between the overlying skin and the underlying cartilage in the supra tip area is also important to decrease scar tissue. Adequate taping and the overlying splint can help in that regard. Another technique is advancement suturing of the nasal soft tissue is also another technique.