Custom skull implants are the premier method of aesthetic skull augmentation. They are superior to older style bone cement skull augmentations due to the ability to achieve a much more significant augmentation effect and an assured smooth shape through a small incision. Because it is an implant one of the most common questions from patients is will ever move where it was placed particularly if exposed to trauma.

The placement of skull implants is very different from facial implants. The first and most important difference is their size. They typically cover a very large surface area. That combined with the natural tightness of the scalp the stretches over the skull makes getting them into position much more difficult than facial implants. Once a skull implant is placed into the dissected subperiosteal scalp pocket it is not easy to move it around and get it properly positioned. Thus it it hard to imagine it would ever slide around and get out of position later.

But what really ensures that their intraoperative position would never change at anytime for the rest of the patient’s life are several intraoperative techniques and the healing process that naturally occurs around implants. During surgery I place multiple perfusion holes through the implant with a dermal punch which allows for rapid tissue inrgrowth. Also at the incision location the use of one or two small titanium screws ensure the implant stays right where it is placed. These combined with the encapsulation (scar) lining that the body creates around the implant really lock it into place. 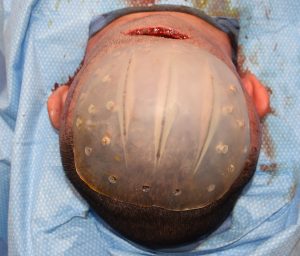 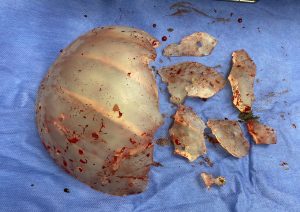 To illustrate how tightly a skull implant gets locked into position and why it would be impossible for it to move out of place later, here is a picture of a skull implant that was removed for the placement of a new skull implant. The patient decided one year after his initial surgery that he wanted a smaller skull implant. Between the tissue ingrowth through the perfusion holes and the surrounding implants capsule, it was necessary to cut the implant into many pieces for its removal…and even then it took almost an hour to get it completely removed.

The large surface area coverage of most custom skull implants and the natural encapsulation process that occurs during healing ensures that they will never move later. The use of a few small screws during its placement is far less important than the subsequent scar ingrowth that occurs into and and around the implant. It would not matter how much trauma the head was exposed to later the skull implant is never going to move.