The perception of a square face usually has much to do with the shape of the jaw. A square lower face is largely influenced by the width of the jaw from the chin back to the jaw angles. This may or may not be associated with a horizontally short jaw as well. While this is a common aesthetic facial concern in Orientals, it may also be seen in other ethnic groups as well. In those seeking a change from this appearance, their goal is a more narrow and slender appearing face which changes the shape from square to an oval.

The traditional approach to narrowing a wide or square lower face is jaw angle reduction surgery. An outer cortex ostectomy technique is preferred over complete angle amputation. While this can have a narrowing effect, the results are limited exclusively to the posterior part of the face where the jaw angles exist. This may not make a face appear slender as the chin and anterior jawline area unchanged. For some patients, this is an important area to combine with jaw angle reduction and is often overlooked in the surgical planning of facial slimming. 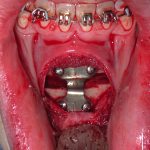 Chin osteotomies can have a significant influence in changing the frontal appearance of the lower face. The traditional forward movement of the downfractured chin segment gives a measureable narrowing effect as its u-shape is brought forward. When combined with some vertical elongation, this effect can be further maximized. But not every face needs visible horizontal or vertical movement of the chin and it may not be asesthetically advised.

Chin osteotomies can also be done just for narrowing its width. By removing a central bone segment (up to 1 cm) from the mobilized chin segment, it can be brought back together in the midline and secured together. This is a far more effective method of width reduction than burring. This is because the effect of burring is limited by the location of the mental nerves. Once the chin segment is narrowed, smoothing of the bone edges along the osteotomy lines is needed to prevent step-offs that can later be felt through the skin.

One caveat about bony chin narrowing is management of the attached soft tissues. When you have less bone support, soft tissue prolapsed and redundancies are possible. This can occur in the jowl areas as well as the floor of the mouth muscles. The genioglossus muscles must be resuspended to the chin as they are detached with central chin bone resection. The mentalis muscle should also be securely reattached to prevent any sagging of the jowls or chin pad. As it turns out, both muscles are sutured to the same place…the plate and screws used to secure the chin osteotomy in the midline.

The entire jaw contributes to a wide and square face for some patients. A narrowing sliding genioplasty can be a valuable addition to a jaw angle reduction in the goal of making a more slender jawline that has more of an oval appearance.