Background:  Tummy tucks, or an abdominoplasty, is a proven method of abdominal reshaping. For the majority of women who have had children, a tummy tuck rather than liposuction alone will produce a better result. The main component of this procedure is the traditional removal of a segment of loose skin and fat which is a horizontally-oriented ellipse that is taken out below (mini-tummy tuck) or above the umbilicus. (full tummy tuck) This does result in the trade-off of a scar but it is usually horizontally placed in a low position which will lie within the camouflage of underwear or a swimsuit.

While many potential tummy tuck patients will have low horizontal c-sections scars, they can easily be incorporated within a limited or full abdominoplasty cut out pattern. Infrequently, a patient will present with a vertical scar between the belly button and the pubis from either child delivery or abdominal surgery. If a full tummy tuck is needed, the  vertical scar is not a problem as it will be removed in its entirety with the skin and fat segment that is removed. When a full tummy tuck is not needed, the vertical scar will then influence how the excess skin removal will be managed.

One method to create a vertical tummy tuck is to remove and tighten skin with an up and down elliptical excisional pattern. A second method is to do a traditional horizontal mini-tummy tuck and just leave the existing vertical scar, resulting in an inverted-T scar pattern. A third approach is to incorporate both a vertical and horizontal excision pattern, creating the same vertical scar but a shorter new horizontal scar. 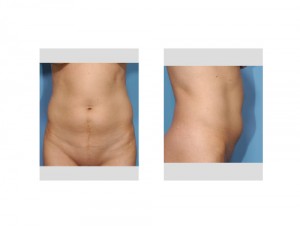 Case Study: This is a 40 year-old female who had previous gynecological surgery done through a vertical incision. While she was not overweight or had a lot of loose skin or excessive fat, she wanted some abdominal and waistline refinement and to have her wide vertical scar revised. 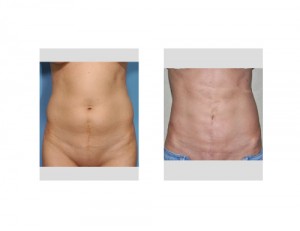 She underwent a limited abdominoplasty procedure which used an inverted-T shape excision of skin and fat. Through this exposure the lower half of her abdominal muscles were plicated vertically. Liposuction was then done through the upper and lower abdomen as well as around into the flank areas. 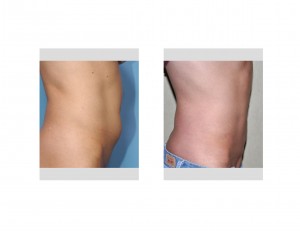 She did have a small drain for five days after surgery and wore a compression band around her abdomen for ten days. She went on to heal without any problems other than a few skin irregularities in the upper abdominal area.

The vertical abdominal scar does not pose any significant problem for carrying out a tummy tuck, it just makes for some minor changes in how it is done. It could be variably performed by just doing liposuction and vertical scar revision in the thinner patient to a more traditional horizontal mini-tummy tuck that also removes an imverted-v segment of skin up to the belly button in those with more moderate skin and fat collections.

1)      Tummy tucks produce significant changes in the shape of the abdomen by a horizontal ellipse of skin and fat. A vertical scar, however, can alter this traditional excisional approach.

2)      A vertical excision approach uses the existing scar and is, by definition,  a limited or mini-tummy tuck. Abdominal skin and muscle tightening is done vertically between the belly button and the pubis.

3)      A vertical tummy tuck can also incorporate some horizontal skin excision and have more of an anchor or inverted-T scar pattern.