Aesthetic Implant Augmentation Of The Vastus Medialis Muscle of the Thigh 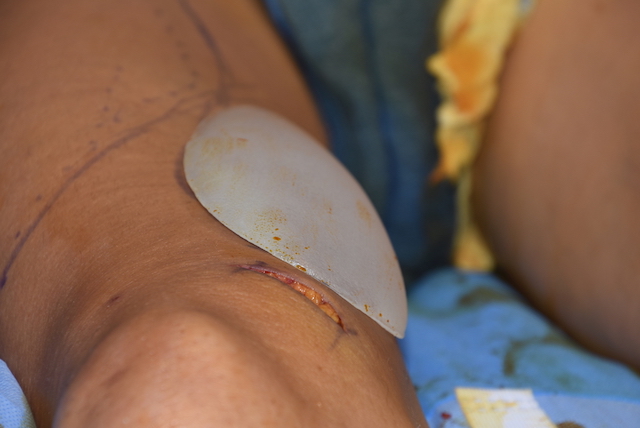 The most common leg muscle that is augmented for aesthetic purposes are the calfs. (gastrocs) Calf implants have been used for decades and are a very successful body implant procedure. In more recent times the upper leg has been periodically implanted as well to augment either the rectus femoris or the combined rectus femoris-vastus laterals muscle combination of the anterior thigh.

One very rarely augmented thigh muscle is the vastus medialis. This muscle is part of the quadriceps which consists of the vastus medialis, intermedius and lateralis and the more midline rectus femoris muscle. The most commonly augmented thigh muscle is the rectus femoris as it runs straight down the front of the thigh. The vests medialis is the most medial or inner of the quad muscles. When it is enlarged, as is seen in body builders, it creates a defined bulge at the inner and superior aspect of the knee. 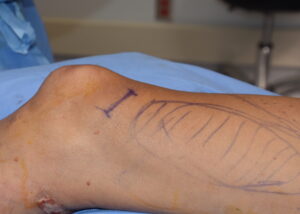 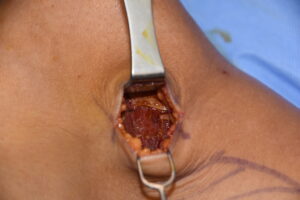 Augmentation of thevastus medialis muscle is done through a small suprapatellar skin incision placed at the inner knee. Direct dissection goes right down to the overlying fascia which is incised. Pocket creation is done by subfascial elevation. It is important to remember that this muscle is not a gliding muscle, thus there is firm attachments of the fascia to the muscle. 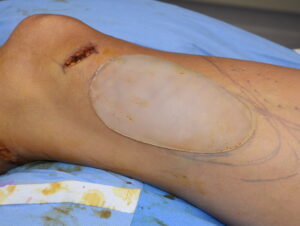 The vastus medialis implant can be done using a style of calf implant that is inverted during placement. Implant volumes of 100cc to 125cc is usually all that is needed. Once the implant is inserted and positioned the fascia is closed and then the overlying skin incision as well.

Numerous lower leg muscles can be augmented with implants including the gastrocnemius, rectus femoris, vastus lateralis as well as the vastus medialis. The key is to place a relatively small incision that provides indirect to close access to create the subfasial pocket. As a general rule you want the incision and final scar to not be directly overlying the implant. This prevents scar edge inversion as well as the risk of muscle contraction abnormalities due to adhesions.