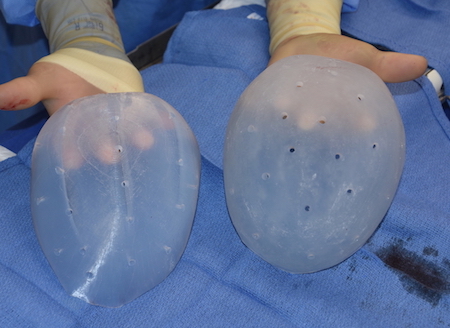 The skull, like any other face or body area, can be augmented. Unlike the face and body, however, fat injection grafting is not a reliable technique to do so. For very small areas of indentation or contour deficiency such fat grafting may be effective. But for more major types of skull augmentation it is not for one simple reason…the natural tightness of the scalp. Fat is simply not a strong enough material to provide an adequate push on the overlying tight scalp and its compressive effect when trying to do is a major reason why fat does not survive well in this area.

To adequately push the scalp outward for any significant skull augmentation effect a more rigid material is required that has a higher elastic modulus than that of the scalp. Bone cements have historically been used but are aesthetically compromised by requiring large scalp incisions to place as well as not having complete control of the augmentation’s shape. Smaller incision bone cement augmentations have been used but they suffer from the elastic recoil of the scalp during the material’s setting which severely limits their use to 60ccs or less of volume.

Custom designed skull implants have proven to be the superior method for augmentation of any surfaces of the skull, whether it be one or all five. (top, front, back and sides) They allow precise preoperative control of the implant’s shape and can be placed through much smaller incisions than bone cements. Their limiting factor is that an immediate insertion of a skull implant is going to be no greater than around 150ccs of volume due to the ability of the scalp to stretch to accommodate the push from underneath it. While this is adequate for the majority of skull augmentations requested, there are some patients who require more to meet their aesthetic goals.

When larger skull augmentations are needed (between 150c and 350ccs) the scalp must first be prepared to create the stretch needed. This is done by the placement of a scalp expander as the first stage. There are different techniques of how to fill the expander (immediate vs post filling) but the key element of their use is that the volume added only needs to be enough to match that of the desired implant’s effect. Thus typical images of large scalp expansions that one may find on the internet do not apply. That is what must be done in scalp reconstructions. But in scalp expansions for skull implants the volume needed is what creates a semblance of the desired aesthetic effect. Typical postoperative expansion occurs over 6 to 8 weeks before the second stage skull implant placement.

When designing larger skull implants the exact volume of the implant is known. Thus, for example, an implant that has a 300cc volume should require a tissue expander fill volume of approximately 75% of the implant’s volume. (around 225 to 250ccs) A perfect volumetric match is ideal but is not an absolute necessity. 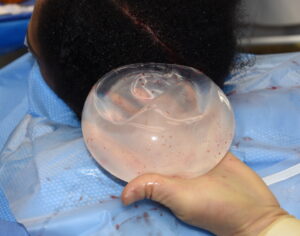 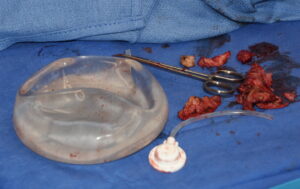 When the second stage procedure is performed the scalp expander is removed and replaced with the implant. But in removing the tissue expander it is also necessary to perform capsulotomies and subtotal capsulectomies. Tremendous scar formation occurs around the implant as would be expected. But the diameter and surface area coverage of the tissue expander is always smaller than that of the actual implant, thus requiring capsule release/removal for the required amount of scalp elevation needed. (pocket creation) The capsules removed from the bone surface, released/removed at the perimeter and some scoring done by electrocautery on the capsule left on the underside the scalp. Capsule removal is not attempted/done from the scalp to prevent injury to the skin and the hair follicle’s blood supply. 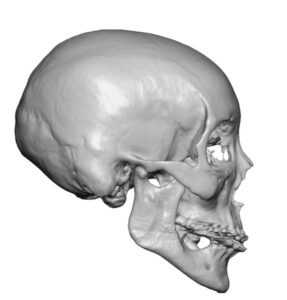 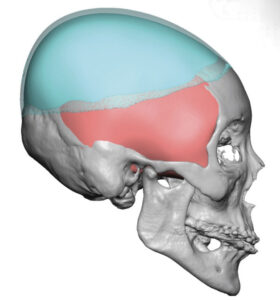 When designing implants to be used as part of a two stage skull augmentation procedure, it is important to prepare for whether the patient was able to achieve the desired scalp expansion. Since patients are responsible for much of the tissue expansion on their own (I usually place about 50 to 75ccs initially) you can never predict what volume expansion has actually been achieved when they arrive for surgery. 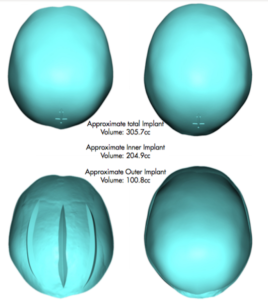 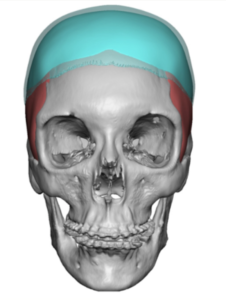 To prepare for a suboptimal scalp expansion I design the skull implant in two pieces. There is a base implant that usually has about 2/3s of the desired volume and then an overlay or cover implant that fits on top of the base one which has the remaining 1/3 of the total implant volume. This approach is done as it would be difficult to smoothly reduce a skull implant should it not be able to fit or the incision closed over it because of suboptimal scalp expansion. 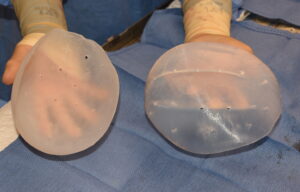 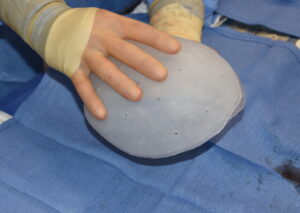 The implant comes in two pieces which are designed to fit together to create a smooth implant outer surface. Perfusions holes are placed in both implants to allow for tissue ingrowth through both implant layers. Once the base implant is inserted then one can determine if the overlay implant will fit as well. In the advent that it doesn’t the overly implant can be saved and inserted at a later date should the patient desire as the scalp will develop some further laxity later. 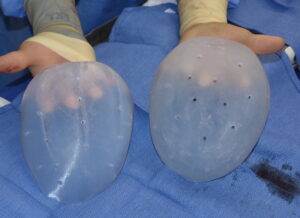 Two-stage larger skull augmentations are as successful as the immediate insertion of a lower volume implant. Employing the well known technique of scalp tissue expansion allows implants of double the size to be placed. But because the patient is responsible for much of the injectable scalp expansion process, one has to be prepared for an implant design that is too big for the subperiosteal pocket that has been expanded.