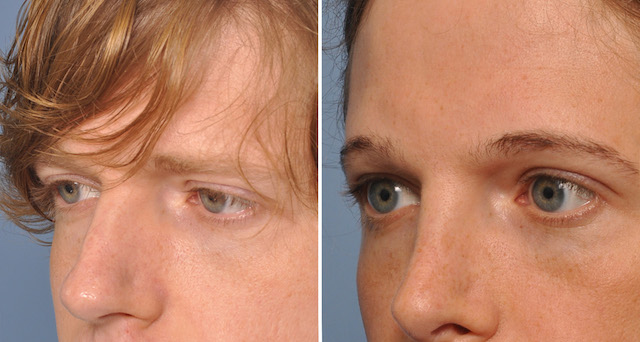 In facial feminization surgery (FFS), forehead recontouring is an important one-third of the facial changes needed. There may be a few patients in which burring of the brow bone is sufficient to reshape the entire superior orbital rim. But most male to female brow bone reductions of any significance require the well described type III bone flap setback technique for an adequate brow bone reduction. 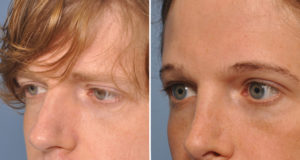 But the bone flap setback alone is often not enough to get a definitive gender change in the FFS patient. As part of the brow recontouring, the lateral or tail of the brow bone must be reduced to allow a more upward sweep to the tail of the eyebrow. In some cases, the orbital rim reduction may need to be carried around to the side to help improve opening up of the eye appearance. In these areas aggressive bone burring can be done because there is no underlying frontal sinus cavity. Since many FFS patients may benefit by a lowering of their frontal hairline, the pretrichial incision needed allows improved access due to the shorter vertical distance between it and the brow bones.

Removing the anterior table of the frontal sinus is done with a reciprocating saw. All circumferential bone cuts are so made. The bone flap is then lifted off gently with small osteotomes. In some cases most of the mucosal lining remains although this more of a style point than a necessity. There is no need to strip or remove any mucosa as it is usually perfectly normal tissue. The removed bone flap is then burred down on both its outer and inner surfaces to make it as flat in shape as possible. Attempts at trying to cut and reshape the bone flap, like is done in pediatric cranial vault surgery, will only result in the fracturing of the bone flap into many pieces and the need for the use of many more fixation needs. The primary goal is to remove the bone flap in one piece and put it back as such.

In some cases the bone flap may be put back and this is enough of a brow bone reduction. But when more significant reductions are needed or a complete side to side reduction effect is needed, burring of the edges of the removed bone flap site, the central sinus septum and intact medial orbital rims is needed. This allows the straightened bone flap to be setback even further and often has a more profound setback effect than any reduction of the actual bone flap itself. In either case 1.5mm microplate fixation of the bone flap is used. If the bone flap remains structurally stable after reshaping and has reasonable surrounding edge bone contacts a single midline fixation plate is all that is needed. This can be supplemented with restorable suture fixation at other points or even additional small plate fixation if desired.

In most cases there will always be some open areas along the flap-bone interface and these will go on to heal. I always cover the entire bone flap prior to closure with a resorbable collagen mesh with or without fibrin glue as a ‘sealant’. In that mesh small pieces of bone can be placed if there are larger gaps. In rare cases when much larger gaps exist that predicted small split thickness cranial bone grafts have been added to ensure complete bony healing.